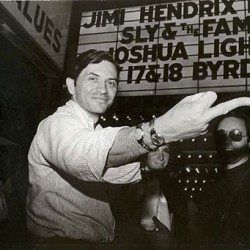 My latest column for Day and Night concern’s Bill Graham’s huge archive of video now online at Wolfgang’s Vault. There’s plenty more every Friday in the paper and online.

The American site Wolfgang’s Vault is now a treasure trove of concert video full of rock’s rich heritage dating back to the ’60s. It has taken four years and millions of dollars to digitize and archive a huge collection of video material filmed and owned by the legendary rock promoter Bill Graham (pictured) and the bulk of it is now available online since last month.

The cache, which was found in a San Francisco warehouse owned by Graham in 2003 included audio recordings, video footage, memorabilia, posters and photographs amounting to 30 million items which serves as an authentic retelling of American rock ‘n’ roll history.

An interview with Jonny Greenwood