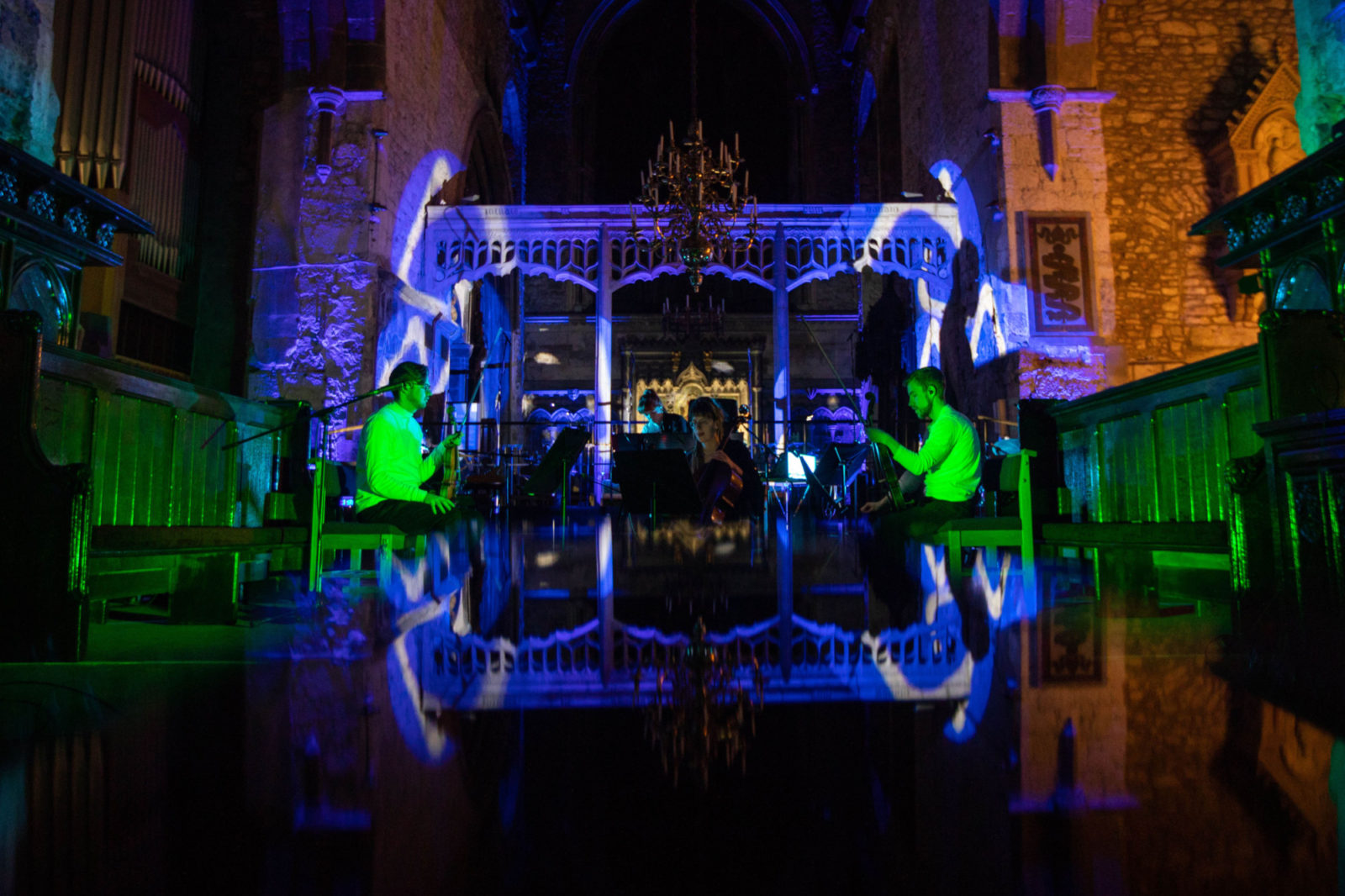 Glasshouse Ensemble performing the music of AFX at the LEAF launch

Black Pumas are playing the Olympia later this year

The Limerick Electronic Arts Festival (LEAF)  is moving its dates from March to September 10th to 13th this year. The festival brings together musicians, social media figures, E-Sports stars and tech innovators in order to showcase the electronic arts.

Music wise, Modeselektor and  Dave Clarke are lined up, a Family Rave with Big Fish Little Fish is planned, there’s a Nialler9-headed free music trail will take place on the Saturday afternoon and The Chime Out Choir will lead a crowd in performing dance classics.

Events across the weekend include Intersection, a business and creative symposium at the new warehouse space at the LCFE campus on  September 11th. The symposium will see keynote interviews and panels on topics from A Digital First Society and AI & Art – Friends or Foes, Sleeptech Workshops and speakers from Viacom Digital Studios, Facebook, LEGO and the EU amongst others.

“Can Limerick Be The Next Berlin?”  In what promises to be a motivating and eye-opening conversation about Limerick on the electronic world stage this panel will have speakers including Simeon Aldred, whose venues like Printworks and the Warehouse Project have revolutionised cities all over the UK, Dave Haslam whose books on contemporary club culture in New York and of course Manchester where he was resident at the iconic Hacienda are the gold standard .

Jim Carroll’s Banter talks will have two outings at LEAF, the first of which will take place on Friday 11th September with Manchester legend and cultural historian, Dave Haslam. This will be followed on Saturday 12th by a fascinating discussion on Atari – Ireland’s first tech success story and how its mid-west factory led to Ireland’s tech revolution.

Creation is the youth element of the weekend. LEAF today making a call out to anyone who is over 14-years-old to get involved with the Creation Youth Conference on 12th September.

Fancy yourself as a hacker or gamer? Have you made a short film or is your bedroom a music studio? We are looking for aspiring influencers, esporters and DJs. If you think you have something to offer the festival, get in touch on [email protected] and tell them a little about yourself and your creative talents.

Amongst the speakers coming over to upskill our teens are:

Sammy Andrews is one of themusic industry’s leading digital advisors and futurologists, having gained a 360-degree view of the music industry with a background as a concert promoter, artist manager and independent record label founder. Andrews will share her experience and advise younger generations how best to communicate their work, market their brand and monetise their talents.

Jayde Vincent will share her experiences as a verified Tik Tok star. Based in Calgary, Canada, 18-year-old Jayde has over 1.1 million followers and is well on her way to becoming a Tik Tok megastar. Tik Tok is one of the fastest growing social media platforms, with over 500 million active users worldwide. Jayde’s mastered the craft of entertaining her mass of followers and tailoring content specifically for Tik Tok and all of her other social media channels. Jayde will present a masterclass in content creation, monetization and branding at Creation.

With every Irish teenager now a digital native, this day-long forum will entertain and educate attendees with talks and panels on E-sports, YouTube, music creation and the world of online collaboration and monetisation from Depop to Spotify. Presented by 2FM DJ and queen of cool Tara Stewart, this generation’s most influential media moguls will also host a series of quick-fire presentations and workshops.

Alongside this, Cleeve’s Factory will be home to installations, events, workshops and major electronic musicians across the weekend.

Lucy Dacus for Dublin gig this May

Black Pumas are playing the Olympia later this year