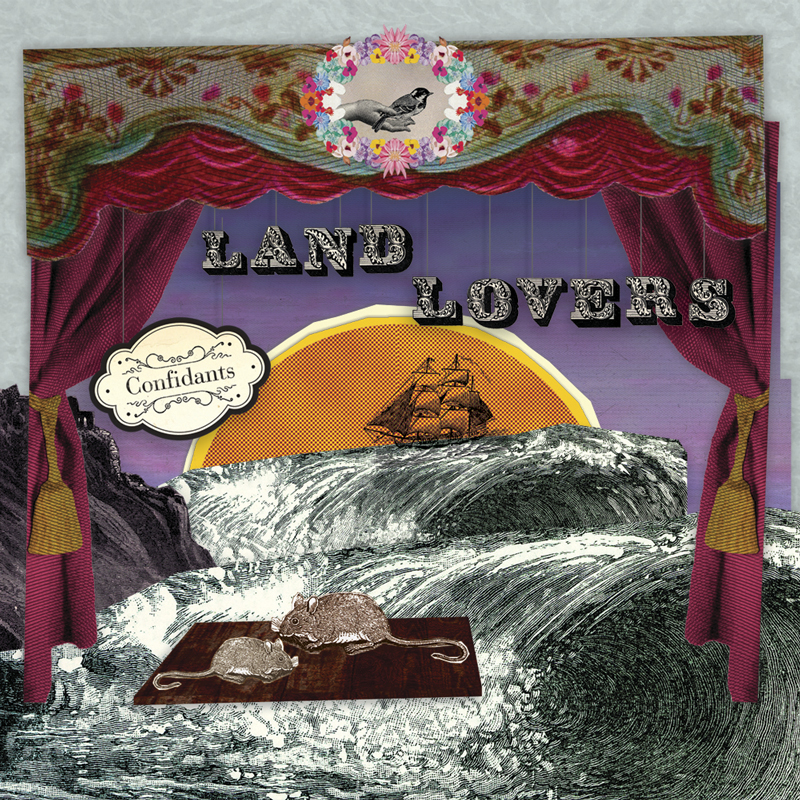 A little bit of that Popical Island magic has rubbed off on Land Lovers‘ second album Confidants. You would hope for that at least as in their capacity as some of the founding members of the collective they have raised the standard of Ireland’s indie-pop output and added some semblance of a scene to it at the same time. Confidants is actually the first album recorded by Land Lovers as a band – 2008’s debut was essentially a solo affair by Padraig Cooney and there’s been bits and bobs since.

The result is a accomplished and rich record of tightly arranged songs with classic pop harmonious melodies (The Beatles, Television and Elvis Costello have been mentioned). Cooney’s profuse lyrics are a big highlight (“I am bound to love you until the end of recorded time / Have the legislators lost their collective minds?” – ‘My Heart Is Angled’).

Death and concealed feelings are the major themes according to the band and the songs concern themselves with some exact topics: the death of a grandmother and the loneliness and guilt that accompanies it (‘The Pocket Orchestra’s Death Song’), a dying man with ‘Waterloo Sunset’ stuck in his head who ponders his relationship with his wife (‘Terry & Julie’), a curmudgeonly elderly man dreams of a wild paradise where he can free of the world (‘Is Nowhere Far Away Anymore?’), childhood holiday songs (‘As Low as Possible’), superhuman teachers (‘Born in Armour’) and “the decline of a relationship between a football nerd and a Pole” (‘Gravedigger’).

The delivery of overtly foreboding themes is balanced out with exuberance and charm-filled songs.. Trust in Land Lovers for a good but thoughtful time.

Land Lovers release Confidants on 30th September through Popical Island. It can be pre-ordered via Bandcamp. It will also be available on download, from iTunes etc and on CD from selected record stores, including Tower, RAGE and HMV Grafton St. in Dublin, Plugd in Cork and the Bell Book & Candle in Galway. A launch gig with support from Squarehead and Last Days Of 1984 happens on Crawdaddy, Dublin on the 30th September.

We Cut Corners – ‘The Leopard’ (video)