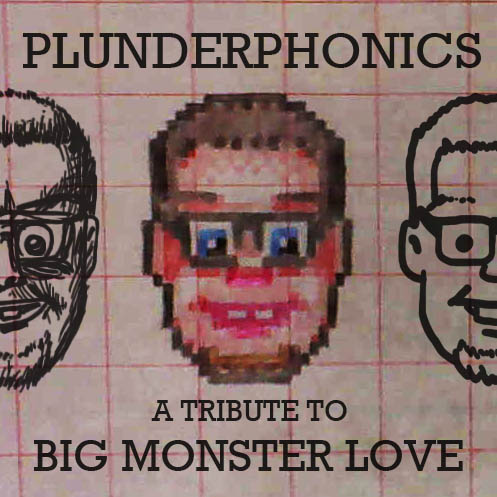 Having seen the Swords-based musician Big Monster Love live a couple of times, I could understand why you would want to make a tribute album to him. His songs are brittle, beautiful things charmingly played on acoustic guitar and relayed with what could be called a trademark Irish humour: cheek, slang terms, honesty, tenderness and truth.

Plunderphonics: A Tribute to Big Monster Love is the result of a Bobby Aherne of No Monster Club proposal and features 15 cover songs from admirers like Squarehead, The Former Soviet Republic, Skelocrats, Jonny Fun and the…Hesitations, Republic of Loose’s Mick Pyro, The Mighty Stef, At Last An Atlas, Ginnels, So Cow and The Spook Of The Thirteenth Lock amongst others.

Most of the songs are covers of BML’s Game Over album and all proceeds from sales go to the Simon Community. The album was recorded without Big Monster Love’s knowledge and sprung on him in a surprise party. Cunningly, Tieranniesaur managed to get him in to appear on his own tribute album under the ruse that the song being recorded was for Popical Island #3.

If you don’t understand some of the lingo, there’s a huge glossary for all the Dublin slang in each track provided by Popical Island below:

Decked out like Geordi La Forge: dressed up as Lieutenant Commander Geordi La Forge, a main character in the television series Star Trek : The Next Generation and its feature films, played by LeVar Burton.

The Slits: The Slits were a Punk Band who formed in 1976.

Plunderphonics: Plunderphonics is a term coined by composer John Oswald in 1985 and applied to any music made by taking one or more existing audio recordings and altering them in some way to make a new composition.

Free gaff: A crazy party held when someone’s parents go out of town.

Confo money: Confirmation money, or money that is gifted to a young person by relatives and neighbours at the Rite of Confirmation.

Till a’ the seas gang dry: Big Monster Love ripped this off Robert Burns’ poem A Red, Red Rose.

Angels: Angels is a song originally part written by uncredited Irish songwriter, Ray Heffernan and made famous by Robbie Williams. Williams and Guy Chambers were subsequently credited as joint co-writers. The song was released as a single in December 1997.

Waxing metaphysical: Talking about the nature of being and the world.

Viking funeral: The practice of burying the deceased along with their material goods.

Best in show: An award to the dog, cat, or other animal judged best of all breeds in a given competition.

ARPA : The acronym for the Advanced Research Projects Agency (ARPA), the funding organization in the United States that developed one of the precursors of the Internet (ARPANET)

To Harp or to Lamb: The Harp and The Slaughtered Lamb are public houses in Swords, Co. Dublin.

Byzantium: Byzantium was an ancient Greek city, founded in 657 BC and named after king Byzas.

Bovver Boots: Stout lace-up boots, especially Dr. Martens, perceived to be worn for the purpose of kicking people in fights, and popular with skinheads or other trouble makers.

Tiocfaidh ár lá: Tiocfaidh ár lá is an Irish language phrase which translates as “our day will come”, the hoped-for day being that of a united Ireland.

The green: The green space between Oaklands Avenue and Oaklands Park in Swords, Co. Dublin.

The Pavillions: A shopping centre in Swords. Co. Dublin.

Chapel Lane: Chapel Lane is a street in Swords, Co. Dublin which runs along the Pre-Catholic Emancipation church – built in 1827. The graveyard contains many interesting headstones including stone to Andrew Kettle who was known as ‘Parnell’s right hand man’.

The Polish discotheque: The name of the Polish nightclub located at the intersection between Chapel Lane and Swords Mainstreet, called ZavediniE.

Hang the Harper: The title and lyric of this song are a reference to the period starting from the 1600s during English rule in Ireland when harps were burned and harpers executed as a way to suppress Irish nationalism.

Nary a tone: Not one tone.

Hangover Quay: This is a play on Hanover Quay, a street address in Dublin.

Begrudgery: Resentment of any person who has achieved success or wealth.