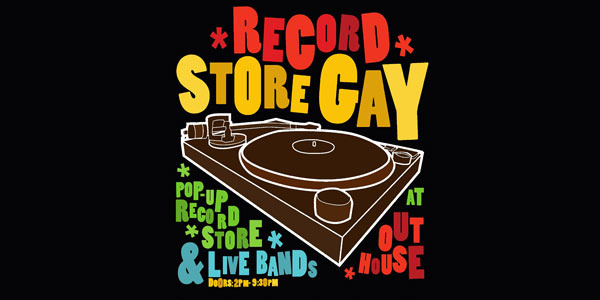 Record Store Day is happening on Saturday and as well as a buttload of once-off special releases and lots of daytime events in Dublin, nationwide and worldwide.

One of the more unique releases “coming out” on Saturday is Record Store Gay in which a bunch of independent bands have recorded covers of their favourite gay anthems. So we get Logikparty doing Jimmy Sommerville’s You Make Me Feel Mighty Real, Crayonsmith doing Blondie’s ‘Atomic’, Drunken Boat doing Culture Club’s ‘Do You Really Want to Hurt Me?’, Gaz Le Rock covering Anita Ward’s ‘Ring My Bell‘, Hello Moon revising “I Feel Love’ and an Abba medley by Kiss By The Book.

The album will be released on CD with an accompanying ‘Play along with’ Melody pop single for each band featuring newly recorded and previously unreleased material. You can get one by donating on Record Store Day to get one from Elastic Witch, R.A.G.E, Tower Records, Spin Dizzy and E2 on College Green. All proceeds go to Outhouse, the LGBT community and resource centre.

You can also get it at the Record Store Gay gig at Outhouse on Capel Street on Saturday with bands including School Tour & Soil Creep with more to be announced playing on the day.

Listen to the album…