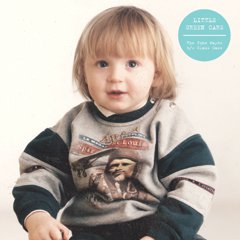 The most promising young Irish band I’ve heard in a while. And Little Green Cars are certainly a young band (like Moths they’re all about 18). They were bestowed a Faces of 2011 tag by State earlier in the year. They previously impressed me during a rare visit to a battle of the band-type competition in 2008. Then, they were clearly a very talented bunch who lacked a prod in the right direction. Three years later and the Dublin band are beginning to do themselves justice.

‘The John Wayne’ is their debut single and is as rousing and anthemic as they’ve got so far. It’s dedicated to “both a beautiful American teen and a makeshift Drum Kit.”

After a failed attempt to gain entry to a nightclub and win the affection of his American dream, Stevie returned home to make a song about it.

The vocals on this tune by Faye O’Rourke’s are HUGE:
My Love Took Me Down To The River (To Silence Me) by littlegreencars

This is the B-side to the single. It’s got an Arcade Fire buzz towards the end:
Glass Case by littlegreencars