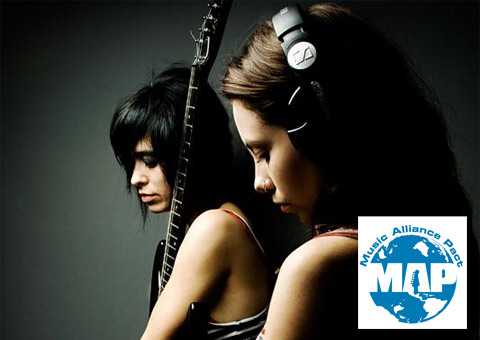 MAP (Music Alliance Pact) is a monthly feature where music bloggers across the world share a track from their home country that they think you should hear.

22 blogs are submitting their country’s pick this month. My Irish contribution is Tenaka who I suggest you get on right away. Let’s get right to it.

Brooklyn’s Here We Go Magic is the bedroom folk-pop project of Luke Temple, who is releasing his self-titled debut this year. He has been praised by Sufjan Stevens and Ben Gibbard for his uniquely gorgeous vocals and meticulous lo-fi production aesthetic. Tunnelvision is the first single – one part Shakespearean sonnet and one part circus music, swirling in a beautiful mess of poetic acrobatics.

Pablo Dacal is a musician, singer and songwriter from Buenos Aires. His first songs circulated in tapes and between 2000 and 2002 he published a series of EPs that caught the attention of the media. The Orquesta De Salón was founded to collate this loose collection onto his first proper album, 13 Grandes Éxitos (2005). His next record was La Era Del Sonido (2008) and Ella Ya Está En La Playa is one of the finest songs from it.

AUSTRALIA – Who The Bloody Hell Are They?

More furious fiddling from The Crooked Fiddle Band, who have a new EP called Rise which they are currently touring. I’ve been getting into bands like Balkan Beat Box and while these guys are different, I like the punk element in the songs. It just sounds like it would be a whole lot of fun to watch.

Like a tropical version of Girl Talk, João Brasil’s music is a mashup of beats and artists from different styles and backgrounds. With a strong influence of Brazilian funk carioca, a style derived from Miami bass and famous because of its explicit lyrics about sex, João Brasil released his first mashup album last year, Big Forbidden Dance. Orgasmadance is one of the best samples of his work. It starts with pieces from Orgasmatron and Brazilian heavy metal band Sepultura, before suddenly meeting Justice’s D.A.N.C.E. and other songs from Justin Timberlake, Nirvana, Snoop Dogg, CSS and Michael Jackson.

The Rural Alberta Advantage, who are actually from Toronto, with frontman Nils Edenloff’s birthplace being Alberta, are one of Canada’s best-kept secrets. They specialize in Neutral Milk Hotel-esque pop with a slight twang and, as Four Night Rider demonstrates, the results are simply, passionately amazing.

For more than 10 years, Congelador have been a cornerstone of the Chilean independent rock scene. After four record releases and two years in a hiatus, the band came back with the Abrigo EP – six songs that gracefully move around post-rock, noise, pop and electronic music.

I could continue to bring you songs from London’s fertile folk-pop scene but it’s time for something a bit different. This month we have a singalong theme song from the self-professed ‘most miserable and hateful band in London’.

Bratze is a Hamburg-based duo consisting of Der Tante Renate and ClickClickDecker. They make beautifully simple electroclash and indietronic music accompanied by sophisticated lyrics, all mixed with a DIY mindset. The featured song, Jean Claude, was their breakthrough as a newcomer in 2006.

Hjaltalín is a nine-piece collective, so almost an orchestra, which uses an eclectic selection of instruments, from bassoon to bass, accordion to clarinet. With these instruments and two singers they create a wall of sound for their folky indie-pop songs. This song features the beautiful voice of singer Högni Egilsson, a catchy chorus, broken up with an Icelandic hymn sung by Sigga Thorlacius.

Tenaka is Ronan Carroll, a one-man band who creates melodic and sinewy slices of electronic pop from his bedroom but which suggest an imagination far beyond the physical. Alaskan is the soundtrack to dipping your toes into a lake before dive-bombing into its sunshine-infested yet chilly waters. The song features on EPonymously Titled, a free EP available from his MySpace. No excuses, download it now.

Wax Anatomical Models may just have formed but they already have plenty of skills. Their sound mixes post-punk, hardcore, shoegaze and electronic influences, but the results in their first demo stand on a different level. Emotional and driving, they are a band to keep an eye on.

The Enright House is the musical project of Mark Roberts from Christchurch. Despite being predominantly a solo affair, his 2007 album A Maze And Amazement was filled with songs that had a real sense of grandeur. Some of these have recently been re-released in acoustic form on the Six Acoustic Renditions EP and, as demonstrated in Scattering The Sun Like Gunshot, they lose none of their epic qualities in the translation.

Richard Holmsen is the singer of the band Delaware but his main focus these days seems to be his solo project. His music is fragile and simple, with few elements other than his guitar and tender vocals. This is quite the opposite of Delaware’s grand, melancholic indie-rock sound. In recent years Holmsen has also made music for film and been involved in an electronica project called Sea. Great Speed is a Music Alliance Pact exclusive, written and recorded only a week ago.

After 10 years in the local scene, Catervas – formed by brothers Pedro, Raul and Javier Reyes – swapped their previous shoegaze sound for melodic rock on 2008 album Hoy Más Que Ayer. With its optimistic, convincing pop songs, Hoy Más Que Ayer is pure passion made into music. Covida is the second single from it and easily the band’s best song to date.

PressPlay are Playgirl and Lisa (aka The Party Queen). Playgirl does vocals and guitars, while Lisa does vocals and electronica. Their influences are PJ Harvey, Peaches, Electrocute, Cobra Killer and Miss Kittin but they sound much better than some of their heroes – and they’re definitely cuter. The extended version of Play Hot, which is the debut single for their upcoming debut album, was mixed by Woman In Panic, who is actually a guy called Pedro Lourenço.

The Amsterdams are a post-punk, indie power-pop band based in Bucharest. Inspired by the famous Dutch city, their name symbolises the freedom of spirit in every sense. Suffering And Surfing is featured on their forthcoming album, a blend of reckless vocals with freewheeling, volatile riffs and rhythms.

Edinburgh seven-piece Broken Records have just signed to renowned label 4AD, the just reward for over two years of personal sacrifice and preaching to the soon-to-be converted with their relentless touring schedule. Devoted followers like myself have already amassed as many as 18 of Broken Records’ epic, swooning, orchestral songs in one form or another – enough to predict that their debut album, scheduled for release this summer, will probably be 2009’s best.

SINGAPORE – I’m Waking Up To…

Nuance is a four-piece rock band, with a recently self-released eponymous EP. At the heart of the record is the two-part epic Fear Strikes Mankind, an ambitious and intense journey that invokes the rock sensibilities of 90s Radiohead and contemporary post-rock experimentation. In the first part of the song (provided here), the biblical narrative of Abraham’s willing sacrifice of his son, Isaac, is related through the perspectives of both father and son. It’s a troubling journey, but the band does well to face the challenges head-on, both existentially and emotionally.

Seokjune released his first EP, Dok, at the start of 2009. Equipped with an acoustic guitar and a voice that conjures Elliott Smith, he performs one delicate tune after another while singing in Korean or English.

Nouvelle Cuisine are a band with a French name but Spanish nationality. They come from Galicia and have self-produced their new album, De Memoria, which is reminiscent of indie bands in the 90s. They develop their essence in personal lyrics and the soft melodies of their songs.

I’m a real sucker for catchy music like this which builds and builds into a frenetic climax. I love when the horns kick in. I love the DIY nature of the video – you just know he asked all his friends to help out. In short, I think I Love Lindblom.