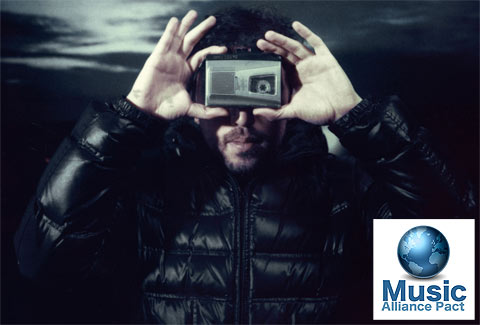 MAP (Music Alliance Pact) is a monthly feature where music bloggers across the world share a track from their home country that they think you should hear.

24 blogs are submitting their country’s pick this month including first-time contributions from France and Denmark. My Irish contribution is the opening track from David Kitt’s new album The Nightsaver which I suggest you get when it comes out on March 27th.

AMERICA: I Guess I’m Floating
Viernes – Glacial Change Of Pace
Viernes are an electronic rock duo from Florida who’ve managed to capture a thrilling loud/quiet/loud aesthetic akin to Grizzly Bear. Glacial Change Of Pace – a MAP exclusive – brings together hard-hitting psychedelia with gorgeously subdued lulls, and vice-versa, in a seamless display of sonic movements and emotions. Look out for their debut album Sinister Devices in the near future.

ARGENTINA: Zonaindie
Lola Arias & Ulises Conti – Te Voy A Vencer Por Knock-out
Lola Arias is a writer, stage director, actress and singer. Ulises Conti is a composer, producer and multi-instrumentalist musician. They started working together in 2003, making music for several theater plays. This wonderful pop-rock love song is from their debut album, El Amor Es Un Francotirador, which comprises the original music from a play with the same name that was directed by Lola and Alejo Moguillansky. The translated title of the song here is “I’m going to beat you by knockout”.

AUSTRALIA: Who The Bloody Hell Are They?
Leader Cheetah – Bloodlines
Festival State four-piece Leader Cheetah are the less manic, more soulfully melodic reincarnation of now-defunct Pharaohs. Their music is layered folk-rock twang meets brooding pop – think Neil Young’s moody younger brother in stormy weather. Bloodlines reminds me of Interpol circa the jangling guitar, tonal shift glory days of Turn On The Bright Lights. The vocals of singer Dan Crannitch are mind-addlingly beautiful and dark, especially when met with the surge of harmonies in the chorus. Leader Cheetah’s debut album The Sunspot Letters is out now on Spunk Records.

BRAZIL:Meio Desligado
Black Drawing Chalks – Big Deal
Any fan of Turbonegro, Queens Of The Stone Age and others bands who make dirty and fast rock’n’roll will love Black Drawing Chalks. Describing their sound as “music to drink and fuck to”, they come from Goiânia Rock City and have one of the most incredible shows I’ve seen on the Brazilian underground.

CANADA:I(Heart)Music
Amos The Transparent – Lemons, aka (BigFishLittlePond)
Ottawa may be Canada’s capital but it hasn’t produced much in the way of great Canadian music. Amos The Transparent are the exception to this rule. Their debut, Everything I’ve Forgotten To Forget, featured contributions from members of Stars and Broken Social Scene, and sounded like those two other bands. Lemons, aka (BigFishLittlePond) is taken from their about-to-be-released follow-up EP and finds the band inhabiting similarly stunning territory.

CHILE: Super 45
Vapourboat – Full Trains Of Dead People
Vapourboat is the Scottish project of Chilean-born Nico Carcavilla. His songs are composed entirely in his bedroom, inspired by the genius of Otis Redding. Perhaps it is this influence which makes Carcavilla sing like a man who has lived it all, when he is actually just starting. Being only 14, his songs incorporate instruments such as ukuleles, accordions, guitars and keyboards, and the Neutral Milk Hotel-esque arrangements end up developing into sad, long walks that owe their intensity to Beirut.

DENMARK: All Scandinavian
Kellermensch – All Time Low
Their name is inspired by Fjodor Dostojevski’s novel Notes From Underground, they’re heavily influenced by the German expressionist movement Die Brücke and the Esbjerg-based Danes are musically related to both Tom Waits and metal acts like Tool. Their eponymous debut album is stunningly original and a massive contribution to the already vibrant Danish rock and metal scenes.

ENGLAND: The Daily Growl
Blacklands – Come Sad Light Of Dawn
This month we return to folkiness, mainly because if I don’t cover Blacklands soon, main man Al Murphy will have moved to New York and his music will no longer be ‘England’ for MAP. It’s lovely sepia-tinged fireside acoustic pickings. Come Sad Light Of Dawn is a gorgeous song, conceived in Berlin, executed in a cottage on a desolate Yorkshire moor. You may be able to tell.

FRANCE: SoundNation
Sliimy – Trust Me
Sliimy may be best known for his cover of Britney Spears’ Womanizer but the 20-year-old is a talented artist in his own right, with his high-pitched vocals and pop sensibility reminiscent of Mika.

GERMANY: Blogpartei
Five! Fast!! Hits!!! – Keep My Name Out Your Mouth
Five! Fast!! Hits!!! have been an institution in Munich for years. No month without at least one gig, until now. Singer Raffi is moving to London while Amadeus, the true head of the band, will pay attention to his other projects such as Elektrik Kezy. Their melodic, hectic, eclectic and energetic shows will be missed.

ICELAND: I Love Icelandic Music
Ólafur Arnalds – Himininn Er Að Hrynja, En Stjörnurnar Fara þér Vel
Ólafur Arnalds is a talented 21-year-old musician, part of the new generation of classical composers. He hails from the suburban town of Mosfellsbær, just outside Reykjavík. He has toured extensively around Europe and North America with a live string quartet and last summer he supported Sigur Rós on some European shows. The song here – translated as “The sky is falling but the stars look good with your dress” – is on his Variations Of Static EP which shows off his crackling electronics and sounds.

IRELAND: Nialler9
David Kitt – Move It On
The opening track from Kittser’s sixth album The Nightsaver displays the same solid thread of songwriting and homemade invention he has always been able to produce regardless of the style inherent within thanks to his distinctive voice and ear for a tune. The album, which was recorded at the top of a winding staircase somewhere along Dublin’s Grand Canal, may turn out to be his best yet.

ITALY: Polaroid
Death In Donut Plains – Over And Above
Death In Donut Plains is the solo project of Enrico Boccioletti from Pesaro. He plays evocative electronic music with a wide range of inspirations such as Aphex Twin, Fuck Buttons, M83 and The Radio Dept. He has created some lovely covers of Liars, dEUS and Good Shoes but his latest EP has a lighter and more pop touch, in a sort of Postal Service mood.

MEXICO: Club Fonograma
Juan Son – Mermaid Sashimi
Mermaid Sashimi is the first solo album by Mexico’s most prolific contemporary vocalist, Juan Son. After the breakup of his highly celebrated band Porter, he expands his already singular vision with much confidence and complete freedom, delivering what’s arguably Mexico’s best production in a while. He has the sensibility of a story-teller and the thirst of a scientist.

NEW ZEALAND: Counting The Beat
The Verlaines – Yangtze Cod And Chips
The Verlaines were one of the bands to define the Dunedin Sound, releasing a number of classic recordings on the iconic Flying Nun Records label between 1981 and 1996. They returned in 2007 with a well-regarded album Pot Boiler and are about to release a new politically-inspired record called Corporate Moronic. Songwriter Graeme Downes has fire in his belly as you can hear on this song about the unlikely subject of a free trade agreement between NZ and China.

NORWAY: Eardrums
The Electones – Right Foot From Left
The Electones make beautiful experimental pop almost without creative boundaries and its foundation rests heavily on 60s-inspired folk and jazz. They are musical cousins to artists such as Múm, Psapp Sigur Rós and The Accidental. The Electones’ debut album If You’ll Be Null, I’ll Be Void will be released on Beatservice Records on March 23 and the band will also be a part of Birdsongs, Beesongs – the upcoming, free Eardrums compilation.

PERU: SoTB
Resplandor – Solar
Resplandor are probably better known abroad than in Peru. Formed a decade ago by Antonio Zelada and Luis Rodriguez, the band’s shoegaze dream pop sound has seen them play with The House Of Love and The Radio Dept. Their most recent album Pleamar was produced by Robin Guthrie and opener Solar is the best song on it.

PORTUGAL: Posso Ouvir Um Disco?
Corsage – Dried Up, River Blues
Corsage are an indie band from Lisbon who brought out their first EP in 2004. The following year they recorded a cover of a Scott Walker song, Angel Of Ashes, for a tribute release to the British musician by Portuguese bands. In 2007, they were featured in the compilation Novo Rock Português (“New Portuguese Rock”) and one of their songs was selected for the soundtrack of a Portuguese soap. Last month they released their new album Finito L’Amore, where you can find this month’s track, Dried Up, River Blues.

ROMANIA: Babylon Noise
Grimus – Backseat Driver
Grimus are an indie/alternative band from Cluj. They formed about four years ago and their debut record Panikon was declared Romania’s best album of 2008 by several musical/cultural communities. Although influenced by the likes of Placebo, Muse and Interpol, they manage to create a unique style and sound. On top of that, these guys are great live on stage – you not only get a performance, you’re in for a show.

SCOTLAND: The Pop Cop
We Were Promised Jetpacks – Ships With Holes Will Sink
We Were Promised Jetpacks ought to be one of the biggest stars of this year’s SXSW. They mix sweeping, sonic brilliance with a melodic accessibility that has made them Glasgow’s most talked-about band since Frightened Rabbit. Indeed, they have followed in the footsteps of their city chums by signing to FatCat, who will release their debut album These Four Walls in June. Until then, here’s a teaser from it to whet the appetite.

SINGAPORE: I’m Waking Up To…
A Vacant Affair – Connecting The Dots
A clean, clinical and almost methodical country like Singapore can only boast the undercurrent of a disenfranchised youth who find different ways of breaking the status quo. A Vacant Affair almost does that, not by being cynically political about the culture here, but by embracing the emotions that come along with it. A post-hardcore band that shares influences with the likes of Underoath and Deftones, they bring it all out in the fantastic debut album closer, Connecting The Dots. AVA steer the listener into a swimming plethora of swirling vocals and guitars as they finally explode into an extended outro that acts as a buffer between you and this crazy, mixed-up world.

SOUTH KOREA: Indieful ROK
Pavlov – The Lioness
If you’re looking for some rock’n’roll you should definitely listen to Pavlov. If you’re not, you probably should anyway. Not a big fan of the genre myself, I gave Pavlov a chance after being told to think of them as AC/DC and The Hives with a frontman who looks like Jarvis Cocker with Tourette’s – and it was not something to regret. Everything they’ve recorded has something special to keep you listening and when the last song has finished it’s hard not to play everything all over again.

SPAIN: El Blog De La Nadadora
Bedroom – Japanese Girl
Even in Spain there are still lots of people who don’t know the powerful secret that Bedroom hides. Folk, torch-songs and traditional music join together around the presence of Bert, the engine behind Bedroom. His debut album LaCasaDinsLaCasa surprised us last year – now it’s your turn to listen to Japanese Girl and discover why.