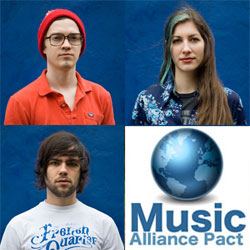 MAP (Music Alliance Pact) asks 25 music bloggers across the world to share a track from their home country that they think you should hear.

Some great stuff from Jonathan Boulet, Land & Peoples, Green Go, Sinusstøv, Walter and your introduction to Munich bass…Schlachthofbronx.. This is the most enjoyable MAP yet. Also, MAP is now featured on Spin’s new site Spin Earth.

Baltimore-based Lands & Peoples seem to have a knack for hypnotherapy. With a commanding ethereal ambience and gorgeous catatonic tensions throughout, Awake is an eye-opener from start to finish. You’ll ask, “How have I not heard of them?” and “I can’t believe they aren’t signed!” Well, believe it. There’s an album in the works coming out later this year (perhaps self-released), but for now you can listen to more gems at their MySpace page.

Les Mentettes is a psychedelic pop band who just released a five-song EP with orchestral arrangements conducted by former Orquesta de Salón member Manuloop. It’s a free release so if you like Hold On you can legally download the other tracks as well. They are currently playing this record live with a full orchestra in several venues around Buenos Aires.

AUSTRALIA: Who The Bloody Hell Are They?

I only recently discovered the very talented Jonathan Boulet’s music online, and upon hearing this song immediately purchased his album from iTunes. It is simply amazing that the 20-year-old produced and recorded everything himself in his garage. Big future for this guy.

A Banda de Joseph Tourton only have a few songs on the internet and released a digital EP last year, but they are already one of the most interesting of the new generation of alternative groups in Brazil. They create instrumental songs full of groove, emotion and originality, making the next step in mangue beat’s (a musical movement from Brazil’s northeast) history, going through post-rock, jazz and their regional culture influences.

For a year or two now, my friends in Toronto have been raving about Green Go to me and now that their debut album, Borders, is out, it’s easy to see why. As songs like Brains For Breakfast show, the band create infectiously catchy pop with shouted group vocals and bouncy riffs that sound like they’d make for a big, sweaty blast of fun in concert.

A mix of experimentation, psychedelia and improvisation are the foundation elements from which Mutrone build solid sound walls comprising samples, effects and a dynamic reminiscent of the machine-like structures of krautrock. With two albums, Oscillatore and Centinela, both released under a Creative Commons licence, the four guys in Mutrone have discovered an exciting way to bring the real sounds of the city into the machine.

The translation of their name is “Sinus Dust” but there’s nothing at all dusty about Claus Pedersen and Søren Friis Dam’s musical output. Who Am I? is lush, sweeping and crackling electro, showered in the melancholy Scandinavians have to live with and everybody else finds moving. Another grand testament to the incredibly healthy state of Danish electronica.

Another month and I’m sticking with all thinks folky, although we’re leaving London for Shipley in Yorkshire which is the home of Laura Groves. She has recently rebranded herself as Blue Roses and released an amazing self-titled album (on XL). Of all the young folky female artists I’ve enthused about here and on my blog, she’s possibly the best.

Indie-pop quartet Delay Trees have just self-released their seven-song debut CD, Soft Construction EP. Desert Island Song is the opening track and the beginning of a dreamy trip through tender pop melodies and bits of psychedelia. It is a very promising start for these guys.

In the beginning, they were two, playing in parks, festivals and concert halls. Six years and three musicians later, Walter keeps riding French roads offering a tasty blend of reggae, blues and folk, spreading messages of love, respect and peace. They’ll be back in studio by the end of the year to record their next album.

Schlachthofbronx defined a whole new genre called Munich bass. This bastard relies heavily on Kuduro, baile funk, dub and dancehall but also likes to play with elements of Bavarian folk and synthpop. Good To Go has never been released officially but turned on the crowd at their sweaty gigs all over central Europe.

Retro Stefson was founded in late 2006 by a group of eight teenagers, school friends from Austurbæjarskóli. They write catchy, semi-pop/semi-rock crossover songs and give great live performances. Last year the band released their debut album Montaña on the Icelandic Kimi Records label. The band’s principal songwriter is Unnsteinn Manual Stefánsson. The lyrics are in English, Spanish and Icelandic.

The first single from Super Extra Bonus Party’s second album Night Horses sees them joined by Cadence Weapon on a stomping live band/electro-hop crossover. It’s a good indication of a band who don’t like to stick to genres for too long. Night Horses also features pop, acoustic folk, instrumental rock and electronic goodness with guest vocals from Mr. Lif, R.S.A.G., May Kay of Fight Like Apes, Ann Scott and Heathers.

Obsessive rhythms, nagging guitars, alienated voices, dirty synths and strangely beautiful songs that are greater than the sum of their parts. Think of Liars, think of Wire, think of Pere Ubu, or don’t think: just dance. This young trio show a driving strength when on stage and they are improving with every gig.

Mr. Racoon is one of several projects by Roberto Polo, among them 60 Tigres and Fuck Her, Or The Terrorists Win. This is by far his most charming moment yet. His music unfolds the very best of a prolific songwriter that, as opposed to what his music may sound like, is a maximalist taking the lo-fi production and his shimmering voice to heroic amplitudes. Ferry 3 is a cut from his third album Katy, released earlier this year through the free storage music website Delhotel Records.

The Sing Songs sing songs, saccharine sweet pop songs. What gives them their staying power are the lyrics. Where you might expect girl loves boy, boy loves girl, instead you get the story of a woman dealing with the death of her baby by walking the streets with a pram, delivering pamphlets. To date the band don’t have any releases but this song has been included on a compilation issued by Real Groove magazine to celebrate New Zealand music month.

Oslo-based Maribel released their long-awaited and brilliant debut Aesthetics only a few days ago, and the Norwegian critics gave them full scores in the reviews. The band play dreamy, noise-drenched, multi-layered shoegaze with almost psychedelic elements. There are obvious references in their sound to bands like My Bloody Valentine, Slowdive, Spacemen 3, Pale Saints and even The Velvet Underground, but Maribel definitely do their own thing and they do it their own way. Maribel and Aesthetics is highly recommended, and will be this Norwegian blogger’s soundtrack to the spring of 2009.

Last year, a man was organizing a gig with a three-band bill but had just two booked. When he was creating the poster, he made up the name TiMaria and included this fictitious group as the third act of the night. (Un)fortunately, he didn’t erase the name before the posters went to press and ended up with a stock of paper to throw away. However, he persuaded his friends, André Moinho and Nuno Rancho, who live in small villages around the city of Leiria, to form a band in 15 days so that he could use the posters and save the planet. And so, with the addition of Nuno’s younger brother, Luis Jerónimo, The TiMaria (“Aunt Maria”) was born. Their debut record will be released in September or October.

Semiosis is the post-rock/ambient/electronic project of Seidiu Alexandru and Serban Ilicevici, two young guys from Craiova. They have just released their debut album, Pictural, and it has received a lot of positive feedback. Pictural is considered the first Romanian post-rock album and is available for free download here – it’s a must if you enjoy listening to this preview.

Boycotts – Beat On The Dancefloor

Boycotts have been in existence for barely a year but it’s still no surprise they’ve got people in Scotland very excited indeed. The Glasgow-based quartet’s edgy guitar-pop pushes all the right buttons, but the ace in the pack is their enchanting frontlady, Stina Twee, all youthful exhuberance and ‘don’t screw with me’ lyrics.

SINGAPORE: I’m Waking Up To…

The Fire Fight – Fires At Night

The Fire Fight are an indie-rock band that have set the local scene on fire with their firebranded musicality and heartfelt lyrics. Fires At Night is the first track from their demo, The Green EP. Brandishing straight-up indie guitar rock that combines the intensity of Bloc Party and the poetic ebb and flow of The One AM Radio, Fires At Night draws the listener into its warmth and, like a slow burning furnace, purifies the experience. Perhaps the best thing about The Fire Fight is their lyrical optimism in a world spiraling into nihilism, as singer Josh Tan pleads that music is for “the hope that burns in your eyes”.

Post-punk band Stretching Journey put out a self-titled album on its own last month. The band is not afraid to blend a plethora of genres into their music and as a consequence of the lo-fi production, several of their songs ended up with a slight psychedelic edge. The album opens with 060, which has a progression and a beat influenced by Los Bunkers, whereas the style of the chorus is inspired by Korean dance-pop act Koyote.

The Field Mice, My Bloody Valentine, The Radio Dept. and The Cure are four good references for this band who have even been namechecked by the famous label Shelflife with their second demo. Sundae are like the best shoegaze pop inherited from Sarah Records, but this time from Seville.

Robert Svensson – I Was Summer, You Were

I can’t tell you one quaint biographical detail about Robert Svensson – he’s a mystery to me. But I am now an instant fan on the strength of I Was Summer, You Were. The song exists to share these two sets of lyrics: “I was summer and you were November” and “I was architecture and you were the wrecking ball”.