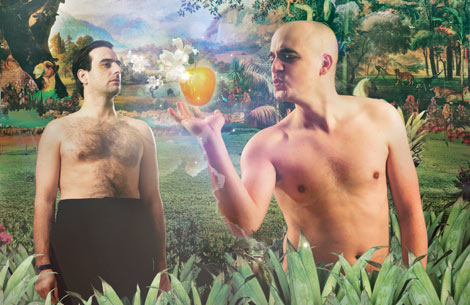 They’re not that popular…. are they?

Regular readers will know my enthuasism for German glitch-techno duo Modeselektor. I have up until now neglected to mention their new album Happy Birthday! which came out last week officially. Where Hello Mom! revelled in the barrage of techno, hip-hop, ambient and electro, Happy Birthday! takes its cue in from the vestiges of early 90s techno. As a result, the tracks are longer, feature less glitch and more booming bass.

Take opener “Godspeed”, a simple but potent buildup of bass-heavy, low-frequency sounds which sounds utterly thrilling. Or “Hyper Hyper”, the Scooter-aping pisstake featuring Otto von Schirach in which we found out what Scooter would have sounded if they were versed in musicology and had an ear for a good synth. Answer: Surprisingly good (but maybe get rid of the bleached blonde singer anyway, he is/was an annoying cunt.).

Other songs follow the form of “Godspeed” with instantly gratifying squelch bass sounds such as “Sucker Pin”, “The Dark Side of the Sun”, “Black Block” and “The Wedding Tocatta Theme”.

That’s not to say the album is over an hour of relentlessly banging tunes (although that would be a fair assessment), the ambience-led instrumentals: “BMI”, “EM Ocean”, “The First Rebirth” and “Edgar” embellish the album enough to make Thom Yorke’s contribution “The White Flash” a disappointing footnote.

I reserve my final though on the album for the third collaboration between TTC and Modelesektor – “2000007” which matches previous collabs “Dancing Box” and “Une Bande avec Sympa” for high dance-ability ratings and is an album highlight. It may be darker than Hello Mom! but Happy Birthday brings with it enough celebration to leave you dancing in your kitchen at 3am.

Modeselektor with live visuals from Pfadfinderei play in the Tivoli on November 1st.

Jeffrey Lewis and the Jitters tonight