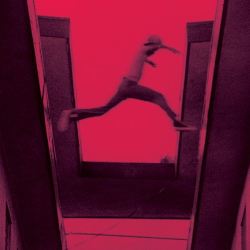 It’s certainly a step in the right bloody direction. While Mos has been off doing movies and getting attacked on current affairs programmes his musical output has waned significantly. There’s no doubting that Black on Both Sides was a landmark hip-hop album, the kind of album that only comes along in the genre every few years but that was 1999 – TEN BLOODY YEARS AGO WTF??

The Ecstatic sees Mos gain some great productions from Madlib and Oh No, J Dilla amongst others. As Adam pointed out on Twitter, he’s still not rapping nearly enough for my liking. The Ecstatic is still a good album, I just want to hear more of those incisive rhymes which blew me away ten years ago. This tune has production by another of the record’s producers Preservation:

Listen to the album on Spinner.
Listen to the Madlib joint ‘The Auditorium’ feat. Slick Rick on Rapp Cats.
Great video of Mos Def on Letterman rapping and drumming on ‘Quiet Dog’ after the transinfomational drift, thanks to Jenna for the tip.