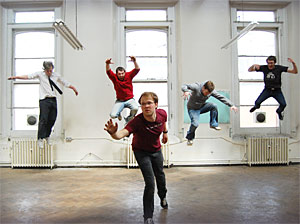 This should be of interest to many of you considering you scored Bats’ debut EP highly in the EP of the year poll on this site in 2007.

Cruel Sea Scientist was an exhilarating 16 minute into the minds of Dublin’s most promising post-punk/metal band. The forthcoming debut album Red in Tooth & Claw on Richter Collective which was produced by Kurt Ballou in Salem, Massachusetts sees Bats bring their scientific agenda once again to the public consciousness. Rupert Morris of the band recently told Sputnik Music one of their aims “is to promote science and fight against the decline in interest in science and rise in popularity of anti-science and pseudo-science like astrology, homeopathy, faith healing, psychics and other new age/old age practices.”

You’ve heard of math-rock but this is ear-shredding, body-shaking science-rock. Each track on the album takes its queue from science and matches it with catchy bludgeoning riffage and catchy (often shouted) melodies. Here is the first single from the album.

Red in Tooth & Claw is out on August 31st in Ireland and the UK. Album launch – 29th of August with Adebisi Shank and Jogging in ALT*, Dublin (poster).