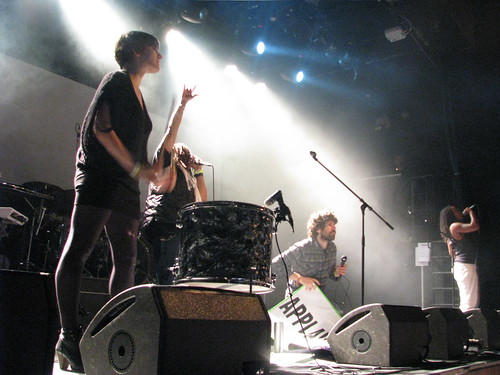 I first mentioned Neon Neon back in April 2007 when Gruff and Boom Bip posted ‘Trick or Treat’ and since then Stainless Style has been released and has become one of my top 5 albums of 2008. So to say I was looking forward to their Irish gig last night is an understatement. The “biographical show / election special” (to quote Gruff) was packed. It was one of two large near-to-full capacity gigs happening on a Tuesday night: MGMT in Ambassador and Neon Neon in Tripod. I wonder how Ida Maria in Whelan’s fared?

One of the subconscious delights I have of gig-going is watching the reaction of the security personnel charged with protecting the stage and crowd down front during a performance. Mick Jagger could be sticking his willy in the frets of Keith Richards’ Telecaster and the security gombeen would be as animated as a deckchair. Last night’s support Yo Majesty could have been writhing around naked, reciting durrty prose (as they are prone to do) and the same fellah would be texting his missus on his phone. Which is pretty much what happened last night (sans nudity).

When the Neon Neon stageshow whirled into effect and Gruff, Boom Bip, Cate Le Bon and an enternally smiling drummer launched into ‘Neon Theme’ backed by three screens of Delorean-related visuals, I found it hard to believe the security could be completely nonchalant.

Go on.. nod your head!
Tap your foot!
Acknowledge the beat!
Take a fleeting glimpse at the stage!

Frankly, as ‘Racquel’ kicks in with a heavily percussive intro and matching Racquel Welch visuals, it’s time to admit it’s their loss and just go with the flow. The album is played mostly sequentially (‘Luxury Pool’ is sadly left out) so there are no real surprises with the exception of the ominous voiceover of Har Mar Superstar as John Z Delorean incarnate between songs. Gruff’s voice sounds weak for the first few tracks but warms up in time for ‘I Lust You’ with vocals from Le Bon. People start to throw serious shapes near the front. By the time Har Mar appears, he has the crowd held tight to his significant belly, beckoning us into a carefree environment where simultaneously standing on your head and rapping is normal, accepted behaviour. Why not throw in a quick acappella version of Michael Jackson’s ‘We Are the World’? Yes, thank you muchly. Har Mar is a very necessary part of the show – the cavorting entertainer, the hypeman to Yo Majesty’s hype women.

By the time the title track and end of Delorean days denouement of ‘Stainless Style’ is upon us, flashing visuals of Michael Douglas, the factory-closure awkward dances of ‘Belfast’, an all-encompassing version of ‘Sweat Shop’ have all wooshed by, leaving Gruff and Boom Bip on-stage in a extended electronic detour of the final song. Gruff kneels as if he was a child playing with toys, though his playthings were special-effect added drumsticks and a voice loop box. It had to be the end. Oblivious, the security stared at his phone waiting for some blink of excitement. If only he had looked over his shoulder..

How the fuck do I have no trousers on?