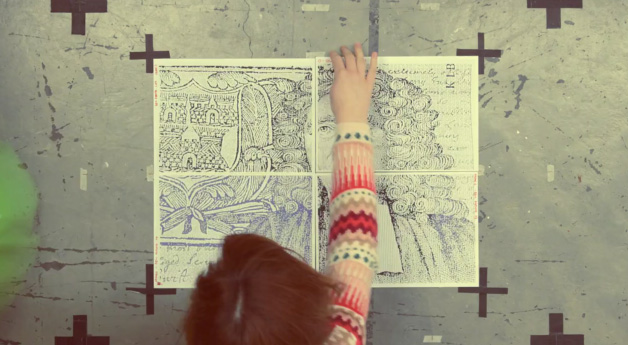 Fergal Brennan directed this photocopy stop-motion animated video for David Kitt‘s new electronic/house side-project New Jackson. This vocodered title track comes from the Night Mail EP which is out now on Pogo Recordings. Pick it up in Elastic Witch and All City or online at Juno or Kudos. Track snippets and Fergal Brennan explains his concept for the video after the jump.

“The way I interpret the song is divided into two sections; a darker opening section, and then some kind of brighter resolution for the last minute. I have no idea what the lyrics are, because they are so distorted by the vocoder, so I can only guess at what it’s about. The title is a reference to the now famous Auden poem about trains, so I suppose I intrepeted the song as being a kind of emotional journey, where you go through something awful, and come out OK in the end. So I wanted to have a visual technique where the image was disintegrating at the beginning and reforming for the end section.

I had been messing around with this idea of animating photocopies before, and the image disintegrates in such a lovely way when you blow them up huge. Photographing the polaroids develop had also been something I wanted to do for ages. It all seemed to fit for this idea.

There was a lot of happy accidents in there too. I wanted to get that sense of locomotion, and I was surprised that at how effective the lines of photocopies are at doing that.

Of course, I couldn’t have done it without every one who helped out;the photocopier movers and everyone who lent me Polaroid cameras!”