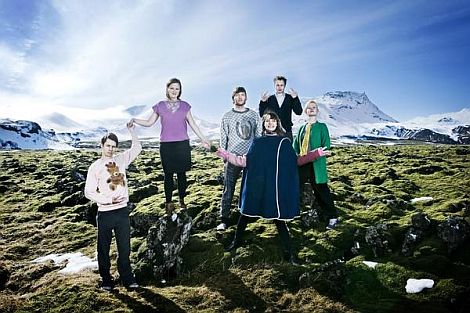 It starts with a familiar Múm electronic chime which kicks into life a minute and a half in. Swirling electronics and melodicas greet us and lead us down a path which may lead nowhere. We pause for a breather take in the atmosphere briefly before we are pushed on and greeted in an opening by two voices: one male, one female sing about “dancing behind eyelids” and things which “smell like teenagers” and “sound like tap-dancing shoes“. The music breaks down into a tap dancing electronic skittering rhythm and the song ends with a lovely refrain. Sounds like a Múm song then.

Despite another of the original lineup leaving recently (Kristín Anna Valtýsdóttir followed her twin sister in November last year and recorded an album with her Animal Collective husband – Pullhair Rubeye) , a new Múm album entitled Go Go Smear The Poison Ivy, is due out September 25 on Fat Cat. Despite being pared back to two original members, the band now includes seven people. They recently recorded an 8 song session for a icelandic radio station Hlaupanotan and played all new songs from the forthcoming album, one of which is below.

Múm – Dancing behind My Eyelids