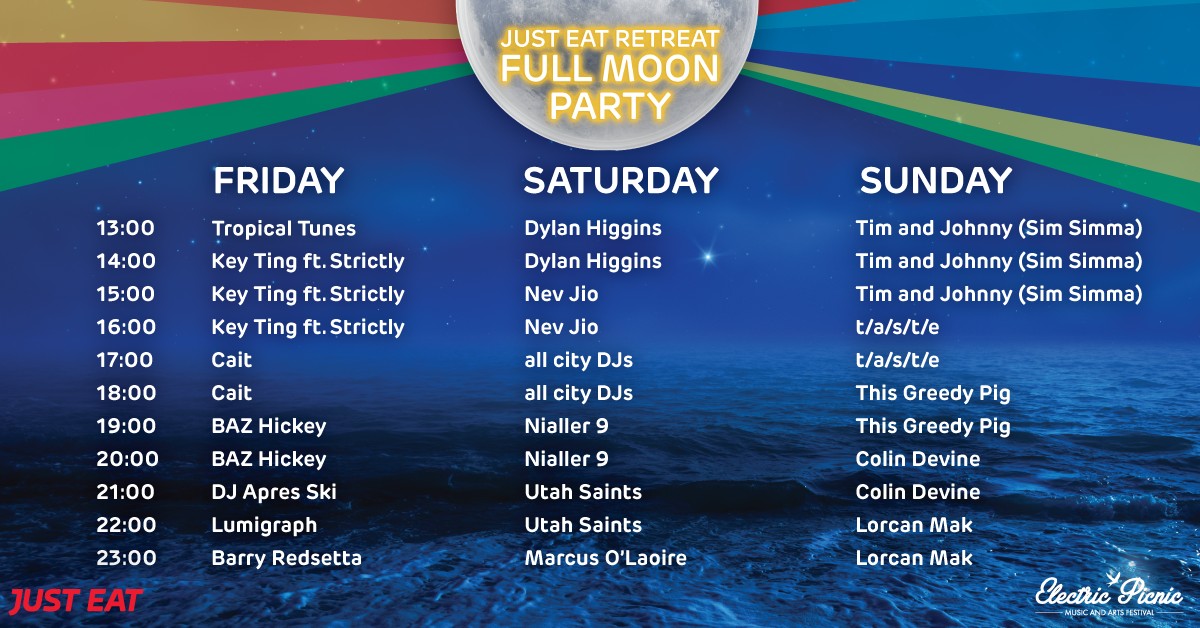 8 gigs and clubs to get to in Cork this weekend

Just Eat Retreat are putting on a Full Moon Party all weekend at Electric Picnic and among the DJs lined up to soundtrack the occasion are:

Key Ting featuring Strictly: Key Ting is one part of We Three Kings, a vinyl-only DJ unit playing funk, soul, disco and whatever gets the party rockin’. Flying solo this time around, Key Ting will be bringing his treasured 45s collection for a spin from 2-5PM. Strictly, hailing from Dublin via Chaloklum Bay & Amsterdam, will be joining Key Ting to close out playing a mix of 10 years of Haad Rin classics to help you move your way into the evening light.

Cait: “One of a slew of new DJs that’s been coming up in Dublin over the last few years, she’s an example of how – outside the big rooms and obvious international fodder – there’s good reason to be getting excited about what is going on in the capital in recent times. Expect fire delivered with class all the way.” – Open Ear

Baz Hickey: The brainchild of Scott Hendy and Pete Isaac, 45 Live is all about the 45rpm single. Producing events with DJs that spin strictly 45s all night, with themed decor and visuals that celebrate the most perfect and enduring vinyl format ever produced.

Dylan Higgins: Dylan Higgins has been a mainstay of the music scene in Dublin for nearly ten years. HIs musical selection ranges from rocksteady to footwork and everything in between.

Nev Jio: Nevan Jio Is a mainstay of the Dublin electronic music scene. He has an incredible amount of experience under his belt and he can be seen genre hopping at Dublins’ best parties including Telephones, Out to Lunch and others.

Daire & Aidan (All City): Home-grown excellence, All City Records, is a store and label based in Dublin’s own Temple Bar. All City are educators and taste-makers when it comes to vinyl.

Utah Saints: Utah Saints are made up of Tim Utah and Jez Willis. Together they have been making music, DJing and playing gigs around the globe since the birth of house music. In that time the world renowned duo have released 9 Top 40 UK hits, 4 of which hit the Top 10. They have sold over 2 million records worldwide, sampled a huge range of artists from Annie Lennox to Slayer and have supported U2 on a UK and European tour.

Marcus O’Laoire: Dublin based Marcus O’Laoire is one of the most in demand DJ’s working in Ireland at the moment. Marcus is respected as a multi-genre party DJ and has supported some huge names, ranging from 2manyDJs to Grandmaster Flash to Steve Aoki and many more.

Time and Johnny (Sim Simma): Manma Saor is a collective of music lovers from Co. Wicklow. A recent DJ excursion to Brazil has added fuel to their already deep burning interest in the rhythms and sounds of South America, Africa and the Caribbean.

t/a/s/t/e: Emmet runs independent, alternative space loving promotion outfit Homebeat and sometimes finds time to DJ at some of the country’s top festivals – there is a common thread running between both and that is an emotional approach to the music he supports and plays.

This greedy pig: Move Slow is a newly formed label from the Greedy Pig crew and a monthly show on Dublin Digital Radio offering up broken beat, afrobeat, disco, house, hip hop and whatever else they’re feeling

Colin Devine: Colin Devine is a DJ/Producer from Dublin. He is currently a resident with Hidden Agenda, The Workmans Club, The Generator Hostel and South William.

Lorcan Mak: Lorcan Mak is a dance music producer from Dublin. Having gained considerable recognition in 2009/10 following the release of a string of well received tracks and remixes on labels such as; Kitsune, Southern Fried Records, Mixmash, Anabatic & Midnight Munchies and has been a prominent name on the scene ever since. His refreshing approach to producing house music and highly energetic and memorable DJ sets have seen him headline at clubs and festivals all over the world and has supported some of the biggest dance acts to visit Irish shores including Marco Carolla, Seth Troxler, Claude Vonstroke, Duke Dumont and Steve Lawler to name a few.

8 gigs and clubs to get to in Cork this weekend