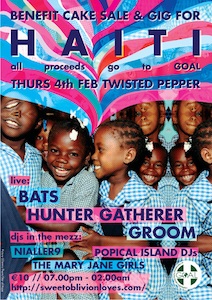 Not a whole lot of international stuff this week apart from The Low Anthem, Alex Metric, The Ex and but loads of good local gigs happening. This week sees a good few Haiti fundraisers take place and a special mention to Sweet Oblivion’s fundraiser in the Twisted Pepper with Bats, Groom, Hunter-Gatherer, a bake sale and myself among the DJs and also the random Karaoke fundraiser in the National Stadium.

WAR Friday Nights at Spy from Tom Speers on Vimeo.