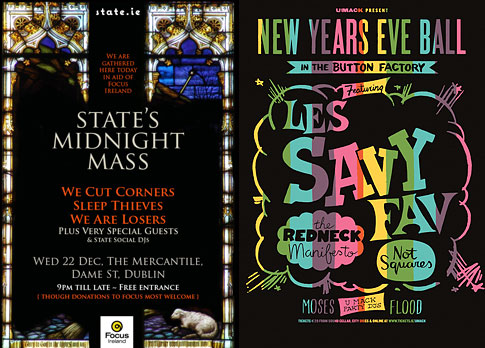 A list of personally recommended events taking place over the next seven days in Dublin. All times are 7.30pm/8pm unless stated. Feel free to leave your picks in the comments.

A special bumper gig guide covering all Christmas and New Year’s Eve gigs of notice. If you know of any other relevant NYE events taking place stick them in the comments. A special mention for State’s third annual Midnight Mass with We Are Losers, We Cut Corners, Sleep Thieves plus three special guest bands also playing at The Mercantile on Wednesday 22nd. It’s FREEEEEEEE and kicks off at 9pm.

And So I Watch You From Afar – Straight Through The Sun

Hands Up Who Wants To Die – Fish And Rashers