Kaboom! Dub and other stories 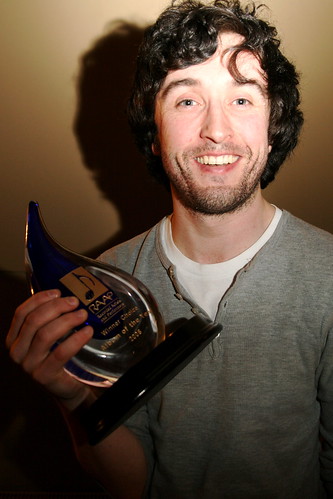 Jape with his Choice music Prize trophy by Loreana Rushe.

A deserved winner in Jape from a shortlist that represents a great cross-section of what happened in Irish music last year. The judging process was fair, level-headed and thoughtful compared to the horror stories and sweat-encrusted judges who emerged from the room in the past (or so I hear). It was also the first time a panel had to be told – “No Twittering”! Congrats to Richie Egan and the band for Ritual . I remember him dropping the album up to the State office on his bike about eleven months ago. Huge credit to Jim and co, for the award and event which necessarily shines a light on Irish music. Forget the nonsense of who won and who should have, the Choice does great things for every act on the list each year and that is the important thing. The reaction to R.S.A.G’s performance was immense.

So that’s two in a row for you lot in terms of predicting the Choice winner via the Nialler9 Irish Album poll. It’s like the Golden Globes to the Choice’s Oscars!

Can we keep the nice blogosphere which turned up today?

Jape – I was a Man (Tapedeck remix)

Kaboom! Dub and other stories