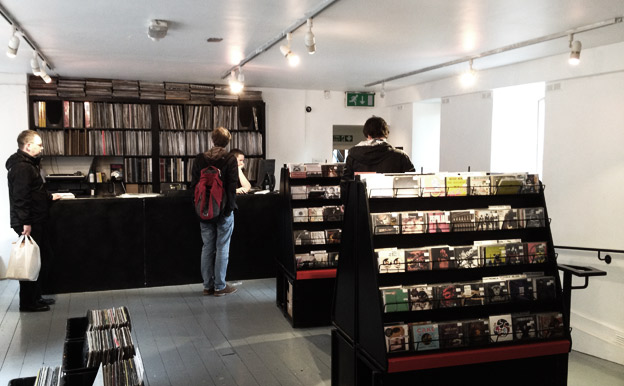 After weeks of rumours surrounding the status of Cork vinyl institution Plugd Records and its sister café Gulpd, the shop this morning announced that it would not be renewing its agreement with its current headquarters, at the Triskel Arts Centre.

Plugd, widely regarded as the home of Irish independent music and general wax-bound esoterica in the city, will host a series of events as a farewell to the venue, before taking time off to re-organise.

The first of these gigs has been confirmed for the 18th (this Sunday), as organic/improvised house outfit ooSe take to the café with GYM in support. More announcements to come.

The official statement is here, courtesy of The G-Man:

“we are closing the doors on our tobin street adventure at the end of the month. After six years here, it has been a difficult decision to make but we feel it is the right one at this time. We have taken things as far as we can with our current set up and location.

It’s been quite a ride… from hawking vinyl with albert, to bangin out coffees with the crew, learning so much about food from our amazing chefs and suppliers, working with incredible musicians and artists from near and far. None of this would have been possible without the support of everyone who came through the doors since 2011. Thanks everyone! And a special thanks to all the people who worked here the last six years – too many to mention – you all made the place what it is today. Thanks also to the Triskel for inviting us in and we wish them well in the future. Now more than ever Cork needs a vibrant, welcoming space for Cork’s arts community, and I hope Triskel becomes that.

This isn’t a goodbye… We will be back in some form or another in the future. But for now we are taking some time off to regroup and come back better! Keep an eye out for some pop up action in the meantime 😉

The good news is the (long) farewell party – we have a lot of special events lined up until the end of the month.. It would be great if you could join us over the next few weeks

Those of us that remember the last time Plugd had to up sticks will also remember the outpouring of emotion that followed them leaving their old HQ on Washington Street. Keeping in operation from their upstairs ticket stall to trusted customers while publicly closed, as well as running pop-ups in the former Réalt Dearg, the boys eventually found space in the disused power station on Caroline St., a state of affairs that lasted several months before the Triskel arrangement was firmed up.

While it’s obviously upsetting to lose yet another accessible arts space in the city at a time when gentrification, development and the current crop of faceless retail chains are hacking away at the city’s character, it won’t be forever, and you can be guaranteed they’ll come back better. They always do.

Support PLUGD/Gulpd before they take a break for the foreseeable: grab whatever you’ve been hankering after from the shop before it closes at the end of the month, visit the café, and be sure and keep an eye on more gig announcements for the coming few weeks.

Check out this 2009 documentary, filmed at their previous location at the old Comet Records on Washington Street.

The Ears of the Town: Plugd records from John Callaghan on Vimeo.