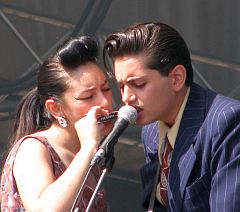 The weekend before Electric Picnic, I got the opportunity, along with 11 other music bloggers to travel to Paris for the three day Rock En Seine festival courtesy of Eurostar and We Are Social on a Little Music Break.

The bloggers in question were: Boaz aka “Codfish” from Cougar Microbes, Stuart from My Chemical Toilet, Marcus from Stereokill, Paul and Mark from Fried My Little Brain, Joe and Sam from Hush House, Terry and Nikki from Buzzin’ Media and in a stroke of genius, a girl from Vice sent her dad Paul and his mate Gareth to cover the weekend.

The festival itself took place in a public park near the city and was great fun. What it lacked (a dance stage), it made up for in the weather, a decent outdoor food court, the best festival chilli I ever tasted, afterhours champagne, and of course, the bands. Here’s the pick of the bunch from this year:

The last time I saw Passion Pit their live show left a lot to be desired. Having missed them at Oxegen, it turns out Paris was a great place to get re-acquainted as the crowd wasn’t nearly as full. Michael Angelakos has largely dumped his seat behind his synth for a frontman role and the live show works all the better for it. Eight solid months on the road has also tightened up the musicianship and the result is a better all-round show.

Angelakos’ falsetto still occasionally veers close to what I would imagine Perez Hilton to sound like if he attempted to sing properly (this doesn’t count). It’s dodgy at worst and enduringly cute at best. More to the point though, the songs from Manners have grown up a bit and developed into proper catchy festival singalongs. Maybe it’s the location but a Gallic synth-loving influence was present in the sunshine.

By far my favourite act of the weekend and the biggest surprise too. This brother and sisters trio were phenomenal in the afternoon sunshine on the second day with their ragtime, swing and jump blues 40s and 50s music. We may have the rockabilly stylings of Imelda May but there’s something much more fruitful and interesting about watching three youngsters channel the past so exuberantly with instrument-swapping, double bass, clavinet, xylophone, trumpet, guitar, a one-cymbal, one-tom setup, mascara and quiffs and their DAD on guitar in the background. Exquisite. They won me over straight away with their acapella version of ‘Walk Right In, Walk Right Out’.

I thoroughly regret not sticking around for the whole of the Faith No More show as their opener was something else. A cover of Peaches and Herb’s 1978 ‘Reunited’ was the perfect WTF? moment and Mike Patton is still as edgy as ever on stage. Here’s the same tune from Reading.

Billed as Les Petit Pois on the lineup, it was the festival’s worst kept secret. As soon as Eagles of Death Metal finished on the opposite stage, a stampede of people rushed to the other end to catch the supergroup of Josh Homme, John Paul Jones and Dave Grohl. The whole set was akin to a decent rock jam band featuring strains of Queens of the Stone Age, Led Zeppelin and Foo Fighters naturally enough. Most of it leaned towards Queens of the Stone Age-type material which is unsurprising considering Homme sings all the tunes.

In reality though, the appeal for me was hearing and seeing Dave Grohl drum again. You know on In Utero, the way the drums sound almost double-tracked? As if Grohl can hit the skins so hard, it creates an almost-echo effect. I always assumed that was the work of Steve Albini. Not so. Grohl does it live too. It’s good to see him behind the kit again. As for the songs – largely meh.

These French boys slayed it in front of the massive home crowd on Saturday night. Four DJs working together on banging terms created a superb night-time dance party.

Don’t let the nu-rave tag fool you. It’s a total misnomer. These guys are tight live, a great “band” working together to deliver an enthusiastic and energetic live show. I’d almost forgotten about them. They have the tunes already ‘Golden Skans’, ‘Atlantis to Interzone’, ‘Magick’, thier cover of ‘Not Over Yet’ and some new songs. An album is forthcoming in early 2010 most likely. I’ll be watching out for it intently.

I hate Oasis for one reason these days. They made me never want to play guitar ever again as I learnt their songs when I was younger and could never get away from Noel’s stunted style at the time. That said, I lined up with the rest of them on the Friday to give them another chance and what happened? Predictably, they broke up a few minutes before they were due on stage. According to one of the dudes from Vampire Weekend, Liam smashed Noel’s custom guitar and blah blah blah. It was all very amusing and just fueled “ze silly English” stereotype amongst French fans. Bloc Party got some mileage out of it too. As the band didn’t play here’s the only thing the crowd got.

After an abysmal performance at Oxegen a few years back, I never thought The Prodigy would have a successful renaissance. They have. The closing Sunday night set was a reminder of how to do dance music for stadiums and/or festivals. The atmosphere was electric and they played a good mix of old (‘Their Law’, ‘Poison’, a dubstep version of ‘Breathe’, ‘Firestarter’, ‘Diesel Power’) and new Invaders Must Die material (‘Omen’, a riotous ‘Take Me To The Hospital’ ,’Warrior’s Dance’).

Keith lepped around the place like mental clown and Maxim rapped pleasing-sounding nonsensical babble over the tunes as ever. A great way to finish. Incidentally, Keith and Liam were on the Eurostar on the way home. Keith was dressed very sharp as you can see here. Dude had an amazing pair of socks on too.

MGMT live – Definitely not a stadium band. Three hits does not a headliner make though the French went mental during ‘Kids’. The set featured the immortal words – “Here’s a new song about being high on ecstasy.”
The Horrors – They’re getting better live but they’ll still never match the heady heights of Primary Colours. Bonus kudos to the singer for roping an unsuspecting roadie by the throat with his microphone.
Missing Metric and Yann Tiersen was annoying.
Caught School of Seven Bells again. Nice tunes but they still need something else live.
Dananananakroyd – I found them very disappointing and irritating.
Bill Callahan also played and of course, it was good. He’s not really a festival musician so because of clashes with Vampire Weekend and Bloc Party, poor ole Bill had an audience of 200 and the people nearby buying kebabs and frites.

All in all though, a superb weekend was had and great to meet all the other bloggers. Here’s the video of our trip that the nice Little Music Break to Paris people made:

Below you will find the photos I took. Big shout out to Sandrine, Camille and Sarah for taking care of us all on the trip.