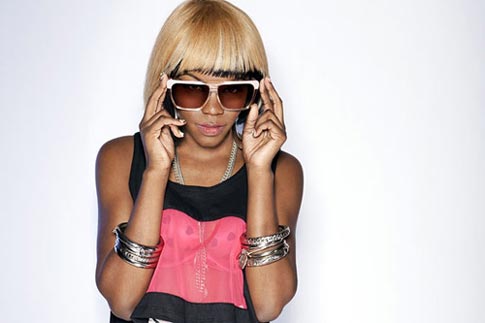 I’ve seen Rye Rye twice now, both times at South By Southwest, once each year since I started going. It feels so long ago, she’s almost become this mythical young Baltimore ghetto dancing rapper who only exists in my hazy memories. Now signed to M.I.A.’s N.E.E.T Recordings, she has been wisely taking her time with her debut album (she’s only just turned 20). Well that time has almost arrived as Go! Pop! Bang! is released on February 22nd in the U.S.

As a teaser, Rye Rye released the Ryeot Powrr mixtape this week and silly spellings aside, it’s over an hour of relentless Hi-NRG tunes produced by DJ Sega featuring a twist of club hits (including the only questionable bit, a cover of ‘Party In The USA’ – see video below), booming rap, B-more beats and stuttering electro. Go hard.