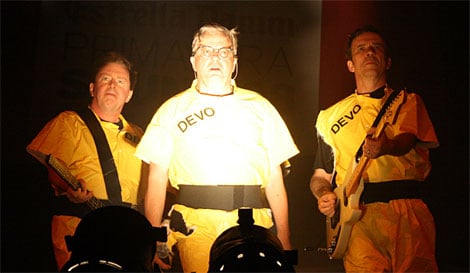 A milli.. A milli 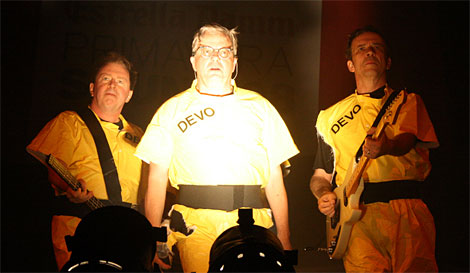 Someone tagged me with a meme recently. At least I think they did. I can’t find the link anywhere anymore. No matter. It allows me to post seven songs I’m listening to. Why seven? Fuck knows. I’m not the person who made it up. I really should do 9 songs as per my moniker but that would remind me too much of that hideous Michael Winterbottom film. Seven it is so. I also made a Muxtape of the songs.

Times New Viking – Drop-Out
I’ve no idea why so many bands this year chose to record their songs with dirty crackling cables and lo-fi swerve but it sounds pretty good to me. For a song with such brevity of length, it really should be starting to annoy me a little bit but alas, this tune from Times New Viking is a sixty five second cracker. [Myspace]

Devo – Mongoloid
The best live band I’ve seen so far in 2008 which is ridiculous considering this song is from their 1978 album Are We Not Men? Sometimes youth can’t keep up. Look at them above – absolute ledgebags. Devo have been in the news of late with talk of the band suing McDonalds for a toy which resembles the Devo trademark outfit.

Steinski – The Pay-Off Mix
Taken from the rather superb What Does it All Mean? 2-disc retrospective of Steve Stein’s work from 1983 – 2006. It’s the first time his work has been physically and officially released. As you may and should know, the track is a collaboration between Steinski and producer Double Dee which won a Tommy Boy remix contest in 1983. ‘The Payoff Mix’ became known as “Lesson 1” in a series of what would be three “lessons” and is a 5 minute mix stuffed with hip-hop samples predating Girl Talk’s spiel by a good 25 years.

White Denim – Shake Shake Shake
I bought Workout Holiday on vinyl over the weekend which is the perfect medium for a band brimming with so many riffs and ideas that it can barely be contained under the needle. Looking forward to their Oxegen set.

Fleet Foxes – She Got Dressed
Everyone is going quietly nuts for Fleet Foxes right now and I’m no exception. I accidentally got my hands on their 2006 EP and this song starts it. I’ve been listening to it quite a lot I’ll have you know.

Heathers – Margie
There’s no way two 18 year olds should make music so accomplished but Louise and Ellie’s Here Not There album is an extremely impressive piece of work. Sure, the Tegan and Sara influence is blatant but it doesn’t hinder the listener’s experience one bit. [Myspace]

She & Him – Sentimental Heart
I’ve been pretty enamoured with Zooey Deschanel’s voice since I heard it. It’s not too syrupy, not too saccharine, not synthetic and not histrionic. What it is: glowing, country-influenced with a slightly lower register than you’d expect. Combine that with M. Ward and you’re onto something special called Volume One. [She & Him]

A milli.. A milli