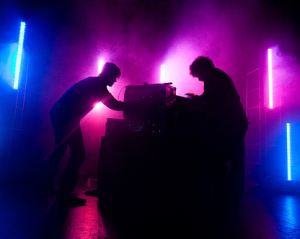 Temporary Pleasure, the new album from Simian Mobile Disco is a great dance record. It’s got Gruff from the Super Furries in a hangover from Neon Neon mode, the brilliant ‘Audacity of Huge’ with Chris Keating of Yeasayer doing an R&B croon, Jamie Lidell doing the electro-disco swirl thing (listen here), the old school beat of ‘Synthesise’, Alex Taylor of Hot Chip leaving his indelible mark all over ‘Bad Blood’ and Telepathe being Telepathe on album closer ‘Pinball’.

Beth Ditto’s contribution to ‘Cruel Intentions’ might be the clear winner though as she sounds the most natural at helming the synth/disco base of the tune. She’s positively diva. Have a listen to a Youtubed version:

The album is out on August 14th.