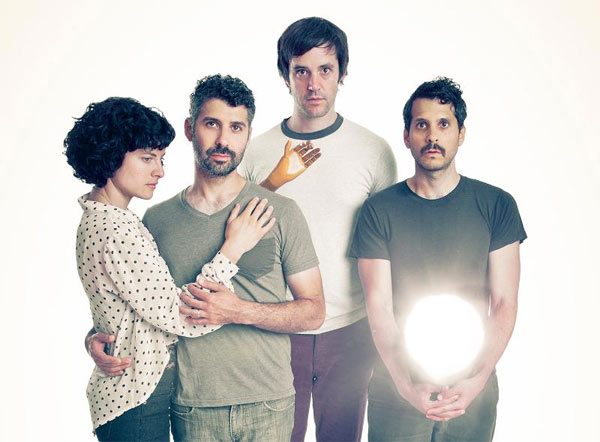 Why?’s songs have always had  a double-edged appeal. Over four albums, the music has moved from experimental sounding arrangements into a more orchestrated state while Yoni Wolf’s rasp serves as the narrator who is frequently gutted and guilty.

At the apex of their discography, sits 2008’s Alopecia, the embodiment of both strands of the Why? sound thus far, indie-rock mechanics, confessional narrative, biting and memorable poetic lyrics, it is a visceral and compounding listen every time.

Follow up album Eskimo Snow never really captured that same alchemy, coming across as jaded and a bit more discarded.

So it’s with that in mind we turn to the band’s first release since that album, a 6-track taster for the band’s Mumps, etc album due in October and what good news it brings. On the evidence of this EP, Why? have recaptured some of that spirit that made Alopecia such a personal and stomach-swelling release.

In particular, Yoni goes after the world with a bit more verve than his lethargic state on Eskimo Snow. He bursts onto opener ‘Sod In The Seed’ with “Let’s review some recent facts…” to a propulsive percussive rhythm, sounding like a man ready to give more of a shit. He plays with rap conventions in his on inimitable scrawny white-boy way saying he hurt his back picking up his wad of money: “But I threw out my lumbar picking up cheques.”

As only a guy with a considerable streak of self-awareness would dare to do, there’s an interlude song set to a beautiful piece of music which recounts the time Yoni made a State Trooper uncomfortable, which is both hilarious and embarrassing.

Yoni’s always been big on self-reflection and self-loathing as if he’s uncomfortable with society and his place in the world. On the chorally-assisted ‘Shag Carpet’ he talks of “farmer’s markets and high-thread count garments”, before bringing the dread right up to date – “On Foursquare this morning like an old yoga yuppie, I checked into Kroger’s in an gold pullover toga like fuck it”.

He plays the desperate creep – “I’m so lonely that I’d let you take me out if you looked my ex-girlfriend or Zooey Deschanel,” before admitting that after the lucky girl falls asleep, he’d rifle through her purse.

Sod In The Seed EP is a reminder Why?’s idiosyncratic appeal and a pertinent taster of what’s to come later in the year.