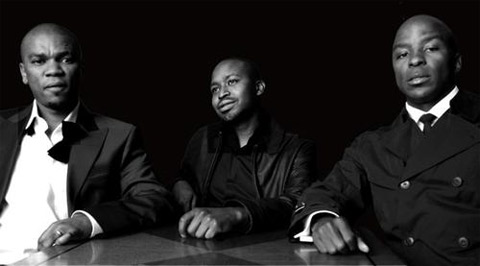 While in Joburg, I got the opportunity to interview some prominent kwaito musicians. Kwaito is South African hip-hop birthed in Johannesburg which mixes in parts of rap, house, R&B and native influences. Many kwaito artists come from the townships: the slums, the ghettos, the projects of South Africa. The biggest of them all is Soweto with a suggested population of 3.5 million people and members of TKZee are also from there.

TKZee formed in the early ’90s and are considered to be amongst the pioneers of kwaito. Their big hit released around the 1998 World Cup and which samples Europe’s ‘Final Countdown’, ‘Shibobo’, featured footballer Benni McCarthy and sold over 100,000 singles – the fastest and biggest selling single in South Africa at the time. Last year, they returned with a new sixth album Coming Home after a hiatus which lasted eight years. With South Africa hosting the World Cup this year, TKZee feature on the official World Cup compilation. In this video interview, they told us about their history and how kwaito has changed since they started