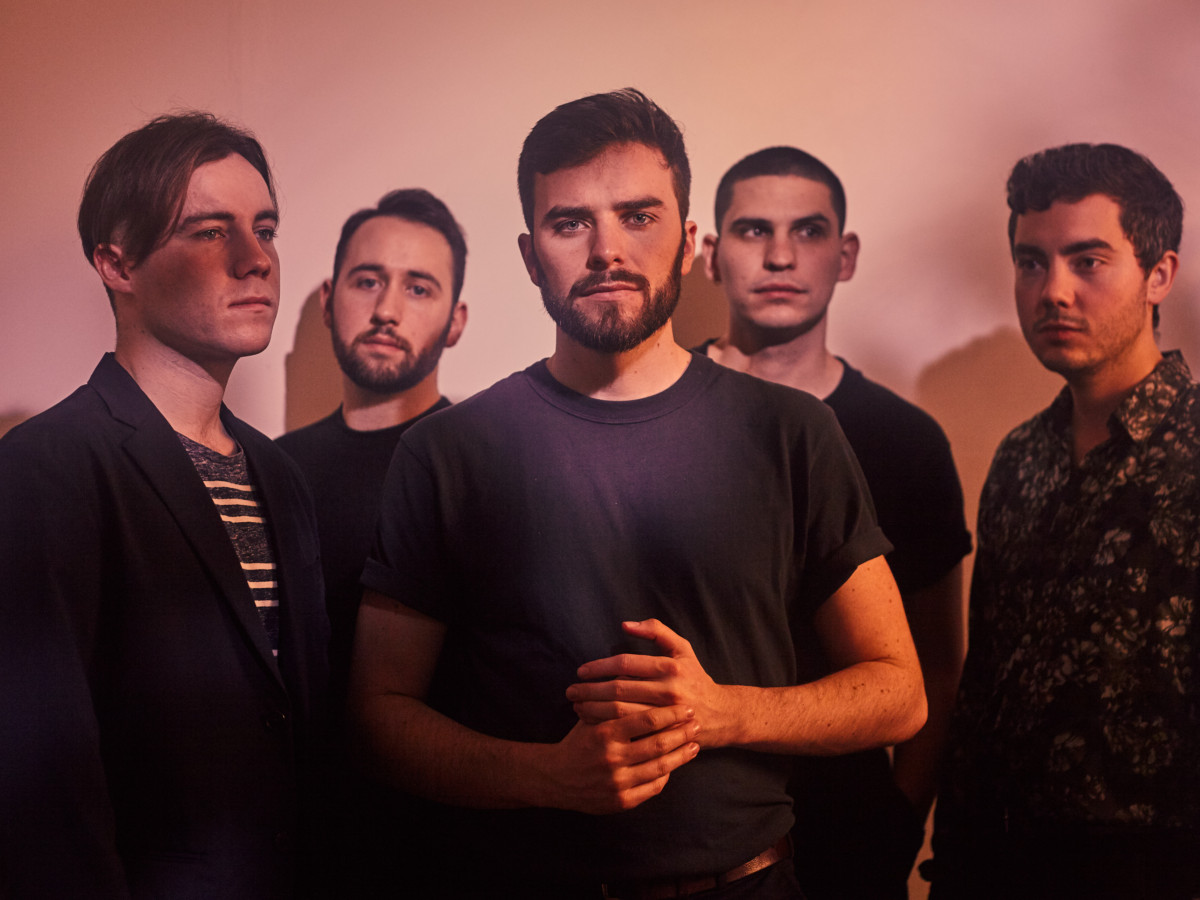 Dublin-based five-piece band Spies made up of Michael Broderick, Neil Dexter, Conor Cusack, Hugh O’Dwyer and Jeffrey Courtney are back after a two-year hiatus from releasing music. Their last release was five-track EP Sea Creature which came out in 2015 featuring tracks such as ‘Quincy Morris’ and lead track ‘Sea Creature’.

Their new release ‘Young Dad’ prompts a leap into a fresh new sound for the band with an added electronic element that experiments with synthesisers and drums machines, further evolving the band’s style into a new.

We caught up with the band to talk about the process of creating their new sound, electronic influences and recording their new album.

What have you been up to over the past two years?

In January 2016 we moved into a new studio and really focused on writing music. We were all working 40 hour weeks and then another 30 in the studio which was exhausting but felt great. Towards the end of the year, our singer Michael went on a 3-month cycling trip to Iran which was a massive undertaking and something that had a profound effect on him as a person. By February 2017 we had finished tracking a batch of songs which we felt represented us accurately. At this point, we decided to take a break from the project. Conor moved to Berlin and Jeff to London. We came back to the tracks late last summer and started mixing them with our longtime producer Jake Miller. Mastering followed and since then we’ve been putting all the pieces together. Good things take time!

Why did you decide to take a break as Spies?

From the outside, it may look as though we’d taken a break for the last 2 years but the reality is for the first year we were working harder than ever on writing new music. After the release of Sea Creature we really wanted to go back to basics and focus on crafting a debut album that we could be proud of. We felt that we needed to detach ourselves from the external part of being in a band – playing shows, social media, etc. Sometimes when you’re in a band it’s easy to get distracted by all the things you think you should be doing and overlook that your primary objective should be to write great music and that everything else is secondary.

By the end of that first year we had written and recorded a body of work that we were really happy with. Then in February last year we decided to take a break for a number of months. This helped us clear our heads, gain perspective and appreciate what we had achieved. Sometimes when you’re in the thick of it creatively it’s impossible to see the wood from the trees. Now we’re excited to share it with the world.

Has this process resulted in a new sound for the band?

The new tracks definitely sound very different to the older material. Back then we were working with a limited palette of two guitars, bass, drums and vocals. On the last two releases we had experimented a bit with synthesisers, which is something, we wanted to do more of. When we set up our own studio our approach to songwriting changed. Whereas before we all sat in the room together and made noise until something came out, this time we started working with a computer and arranging songs in a studio environment. This meant we had the freedom to look at the arrangements differently and explore different approaches which we hadn’t before.

There is a certain added electronic element on the new track compared to the older material. How did that come about? Is that a direction that Spies have always considered taking?

Well, the irony is that in the early days we only had one rule, which was… no synths…. over time though they slowly started creeping into our sound, for example the ms20 line at the end of Moosehead was a real step forward. The introduction of synths and drum machines as a staple came about after we took time to really focus on getting a record together. We all started to listen to more electronic music and although that was never something we associated with Spies, by stepping back it allowed us to dispel any preconceptions we had about what music we should make. We started going to see a lot of electronic acts live too which was a massive influence. Fatima Yahama, Floating Points and New Jackson all put on some pretty special shows which had a big impact on us.

Can you tell me a bit more about the new release ‘Young Dad’ – what is it about, what influenced it?

Young dad was written around the time that we were playing some shows in London with UK bands and felt a bit disillusioned by the whole scene. On one occasion we saw a band arriving to sound check and making sure the strobe light they’d brought was fully operational before plugging in their instruments. So it’s about generally us not fitting into that scene but taking pride in that. We were at a point where moving to London as a band was on the cards for us but it seemed like the town was so saturated with bands like this. The song expresses a fear of blending in with everyone and not making any sort of mark.

What was the process of writing and recording the new record?

There was a specific point where our approach to writing changed. We went to write in Inch, County Kerry for a week and set up a basic recording setup. We borrowed some really good studio monitors and stayed up late, listening to music for hours. That week was hugely important in defining the sound of our new music and establishing a workflow that would continue on the rest of the songs. We brought in Jake Miller who produced the record and Brendan Cox who engineered it so we were able to do things right from the bottom up, the way we wanted. Most of the recording was done in Bow Lane studio which is well renowned for having a killer drum sound. The new material really came to life in there and we were able to bring the songs back to our home studio to add extra parts. We also recorded some other bits with Stephen Dunne in Lamplight Studio and Liam Mulvaney in Abbey studios. All of these studios are now defunct which is incredibly sad as they were great places to work. There was something very poignant about making the most of those spaces before they were gone.

Plans for the new album release? anything to add on what the album is about?

We have a body of work that we can’t wait to share. Our plans should become clear as we continue to release more music.

What is planned for Spies for the near and distant future?

We are playing our first show in over 2 years in May. Come see us upstairs in Whelans where we will be showcasing a lot of our new material.

Tickets for the gig at Whelan’s on Sunday May 6th priced at €13+ are available now via Eventbrite.ie.

Premiere: Watch Whenyoung’s live cover of ‘Dreams’ by The Cranberries