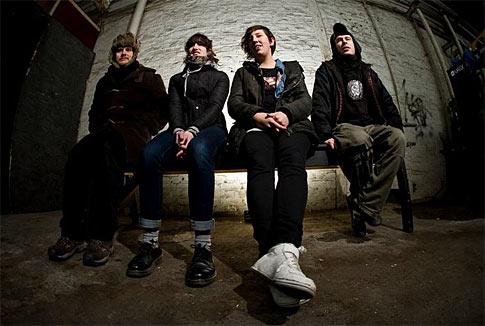 Out On A Limb Records will be releasing Owensie’s debut album Aliens digitally and on CD on February 4th but I’ve got an advance listen of the album right here seeing as it’s a perfect soundtrack to a chilled and snowy Christmas night.

Owensie’s debut highlights a different side to the guitarist who is known for rocking out with Realistic Train, Puget Sound & Terrordactyl. Aliens is a nine-song collection of classical guitar-led finger picking and falsetto, an introspective but uplifting album which certainly recalls the tones of Jose Gonzalez. Aliens was recorded with the help of Andy Mooney (percussion), Mick Roe (drums), Julia Mahon (piano, piano and string arrangements) , Ailbhe Nic Oireachtaigh (viola) and Paddy Dexter (cello) by James Eager (Jogging, Enemies, etc) at the Hive Studios.

A launch gig takes place in The Back Loft, La Cathedral Studios, Dublin, on Friday January 21st, with support from the Amber Wilson from Aberdeen and a solo performance by Eoin Whitfield of Enemies. Tickets are €10 and will include a copy of the album.