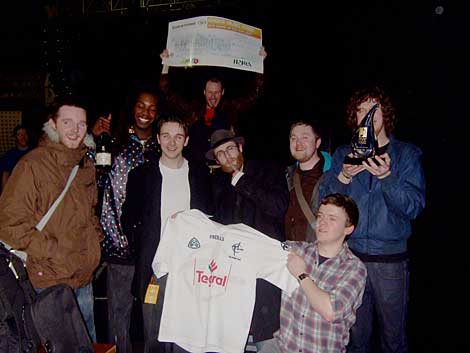 I’m still in absolute shock. I woke up this morning to hear it all over the radio and see it in the papers which reminded me it actually happened.These lads are my best mates. I’m absolutely delighted for them obviously. A mate of mine and the band, Ciaran, said to me last night that he had a feeling that yesterday was a special day for all of us as friends (for numerous reasons) and bought a few bottles of champagne. None of the band thought that far ahead because it just wasn’t an issue. There was no talk of winning, just of the performance and the general buzz of a nomination. When Jim announced the winner, I freaked out (You can see it below); it all seemed so incredulous. I ended up running downstairs and jumping onstage to congratulate them like an eejit. But it was worth it.

The result is an interesting one as The Boners music is so polarising. A few people last night expressed their disappointment to me and the look of shock all around was something to behold. I personally was convinced that there was no way 12 single-minded judges could decide on an album so eclectic. Surely someone would object to hip-hop? And I was of the opinion that just because there has been unpredictability in the past, that does not make a precedent but yet again, Choice has proved its stripes.

Here’s some videos of the night (more to follow)