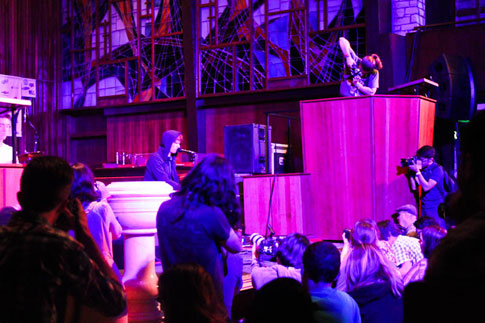 It’s St. Patrick’s Day (or Patty’s Day as they say here) and the silly hats and green Guinness beads are out in drink-soaked force. No different from back home then, apart from the sweltering Thursday heat around Austin, that made much of the afternoon difficult to navigate. With Paddy’s Day in full swing by afternoon, venues were crushed with demand as party-hard Austinites swelled the SXSW venues. There were also set changes, time mixups and slot updates throughout the day which scuppered some of the gigs I attended. But… day two finished in spectacular reverence in a church on 8th Street East. 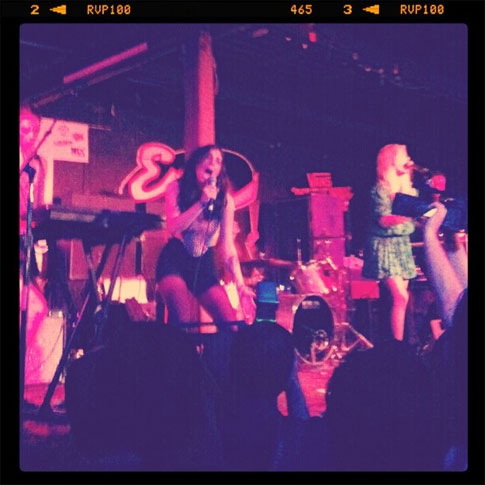 Wow. Wow. WOW. Recent Domino signing Austra totally blew me away. A highly accomplished set of spectral dark electro delivered by a group of sexy people with glitter on their faces and hair in their eyes. The comparison between Katie Stelmanis’ bleating timbre and Fever Ray is even more obvious live and the Canadian seems to be drawing from some Scanadanavian well in the process, but who cares when the songs and the synchronised dancing is this good.
Key Track: ‘The Beat & The Pulse’:
Austra – Lose It

Stonkin’ yodelling, looping, African-influenced songs from Merrill Garber. Was she always this good? Within minutes of her set, she has the audience on their feet from the pews whooping and hollering like a real congregation. Jittery half-time drum beats and Garber’s looped yodel are the foundation for the brass duo to add some Afro-funk into the mix. ‘Bizness’ is predictably one of the highlights of the festival so far. 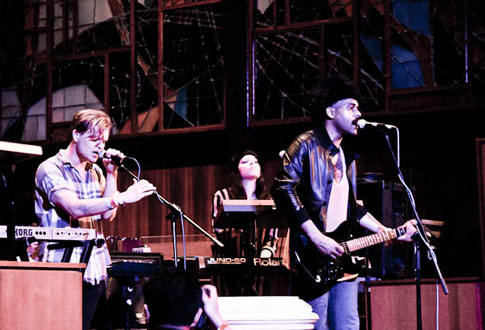 As much as I try I cannot get into Twin Shadow’s album Forget. Live though, it’s a different proposition and it’s hard to imagine anyone not being swayed in some way by these ’80s-referencing synth pop songs. Twin Shadow had already established themselves as a class act here having just come off-stage playing to thousands before The Strokes down at Auditorium Shores. George Lewis Jr’s crooning deep baritone voice is a highlight. There’s also so ’80s Molly Ringwald style dancing in the aisles. In a church. Awesome. For their last song, the band are joined by debut album producer Chris Taylor of Grizzly Bear on ‘Forget’. 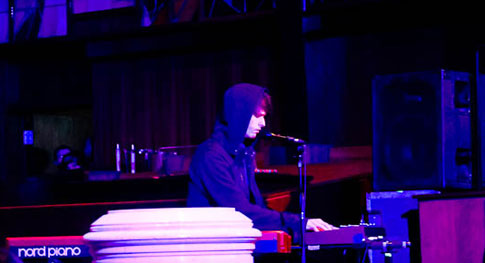 A church is really the perfect place to see James Blake. You know it will be hushed, easy on the ears and there’ll be seats (sore feet are becoming an issue after a week of walking around Austin). The setting is a perfect place for Blake’s minimal threadbare productions. Every drum hit, bass chord, guitar and synth note reverberates in the space. While it’s fascinating to watch Blake use autotune and pitch-shift effects to twist his voice into someone else’s entirely, there’s no doubt about the ability of his own throat. Featuring songs from his debut self-titled LP and the Klavierwerke EP, the set fell between soul, post-dubstep and ambient. Breaking down and building up again until echoes and fragments were left. Every instrument is considered and every note counts.

Out the backyard of this 6th Street bar, Lord Huron’s tropical indie-pop had a celebratory effect. Benji Schneider’s first two EPs as Lord Huron Into The Sun EP and Mighty EP released last year led to expectations of a hazy one-man solo show but this was much more direct. A full-band in “bashing-it-out” mode, it’s the closest we’ve come yet to live chillwave. Los Angeles via the Caribbean complete with steel pans, bright guitar tones and bongos.The samples of lapping shores might be a bit too much though…
Key Track: ‘Mighty’:
Download: Lord Huron – Mighty

They may look like a nitty gritty country band from down South but at least one of them is English and it’s the most-redneck looking one. Grouplove’s set at I Guess I’m Floating’s day party was countrified indie played by a highly energetic bunch. At times, most of the time this band look like they are about to start a fight with the rest of the bar but instead they put their energies into hammering their instruments as hard as they can and singing as loud as possible The album will make or break ’em.
Key Track: ‘Colours’: