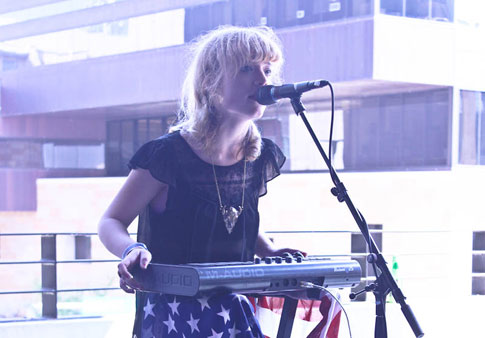 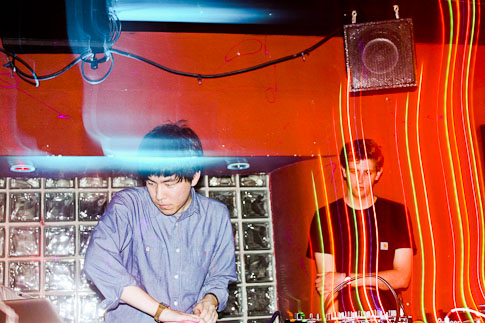 Friday at SXSW traditionally starts with the Irish Breakfast, an all-day event where most of the Irish bands at the festival play. It’s held in BD Riley’s an Irish pub seemingly transported across the ocean in pristine condition. There was only time for catching a handful of the acts: James Vincent McMorrow impressed everyone it seems at every show he did (that was a lot), Halves were their usual awesome selves, Funeral Suits have improved their brand of spiky electro rock since the last time out and Adebisi Shank brought the madness which featured red-masked Vinny defenestrating himself out the window onto 6th Street. Here’s how the rest of Friday’s key acts for me went down.

Either these two are seriously underrated in the U.S. or people really didn’t know this was on, but this 1am club show just off 6th Street was oddly under attended. That was everyone else’s loss as these guys of are two of the best electronic producers DJs going.

Nosaj Thing kicked things off with a glitchy knob-fixated (excuse me) set that was every bit as good as his set at SXSW two years ago. His live set took went from glitch to hip-hop to G-funk with a Burial remix along the way.

Jamie xx’s DJ set was much more straightforward but like all good DJ sets, it was full of great tunes that you just want to keep dancing to. In the mix was his ‘Far Nearer’ tune that goes heavy on the steel pan, some Biggie, David Holmes, Letherette’s ‘Blad’, Luke Vibert’s Jamie Lidell remix and the only blight on the night, some ill-advised drum & bass. He finished out with what I can only presume was a new Jamie xx remix of Adele’s ‘He Won’t Go’ lest my ears deceived me. Much more understated than his ‘Rolling In The Deep’ one if so.

Here’s Jamie’s still-amazing Benji B mix which you need in your life:
Jamie xx – In The Mix for Benji B on BBC Radio 1 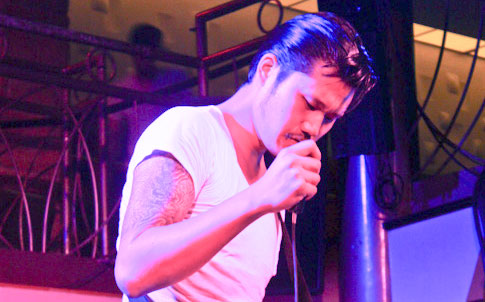 Certainly, one of the most unique performers at SXSW. Alex Zhung Hai is a Taiwanese punk rockabilly kid with slicked back black hair and an obsession for songs that sound like Suicide mashed up with ’50s rock ‘n’ roll. He appears on stage with nothing but a vintage microphone, a guitar and pedals he barely uses and proceeds to look tough for 30 minutes while he plays the guy with attitude.Somehow it’s pretty captivating – like a monologue inside the mind of a sermonising bad boy. When he takes out his comb to fix his hair it’s perhaps a bit too affected and ‘Lord Knows Best’ was perhaps a little too karaoke but the fact that Zhung doesn’t look like an asshole doing this says much.
Dirty Beaches – Sweet 17

Delighted to finally see Danielle Johnson & co. play live in the flesh. Computer Magic play cute synth-pop songs, that is their modus operandi. Live, though the songs were performed by a band, it did seem like it was early in that band’s time together. The songs are superb though, so go pick up the 12″ on Black Iris.
In So Many Ways by Computer Magic 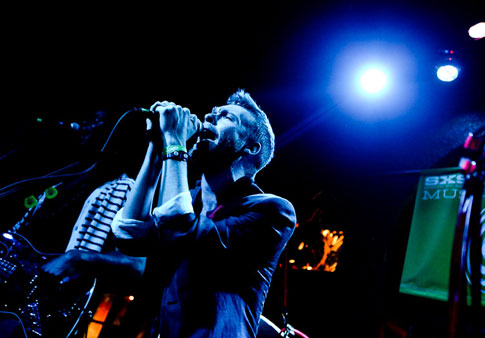 Chris Glover’s music falls into two camps: brilliant danceable funky pop and cheesy dance-pop. I had a hard time reconciling the two. For every super tune like ‘Something I’m Not’ or ‘Golden Train’ there’s one like ‘Animal Animal’ which contain either too little substance or too much cod-reggae to really standout. If there’s room in your heart for some complete unashamed pop (with extra cheese) then you’ll love it all.
Something I’m Not by Penguin Prison