The annual South By Southwest Festival takes place in Austin in March and is the world’s biggest showcase of new music. As such, there’s not much better places to see new bands even if it’s debatable if 75% of the thousands of bands going there should actually bother.

SXSW is for bands with traction, with some sort of deal already in place, whether that’s management, publishing, record deal, a booking agent or other. A band who are unknown in their home country shouldn’t really be going just cos they were invited. It’s a waste of time and money yet bands and acts go every year despite better advice. Some advice here from 2016.

Case in point, the acts that are going to SXSW are made up of bands who have a decent footing nationally with at least a record deal, booking agent, label or otherwise in the US or interest from overseas.

Music From Ireland will showcase at this year’s SXSW Music in Austin, Texas at The Velveetta Room on March 15th and BD Riley’s on 6th St, Thursday March 16th. 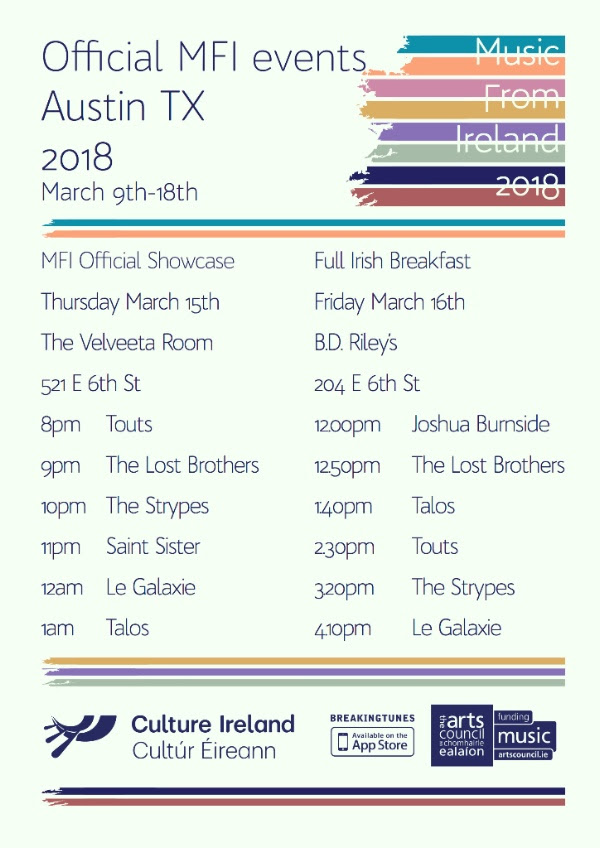 More info from Music From Ireland.
You can see all the irish artist intinerarys here.

Here’s a Spotify list of all the Irish acts:

The best gigs & clubs in Dublin city this week