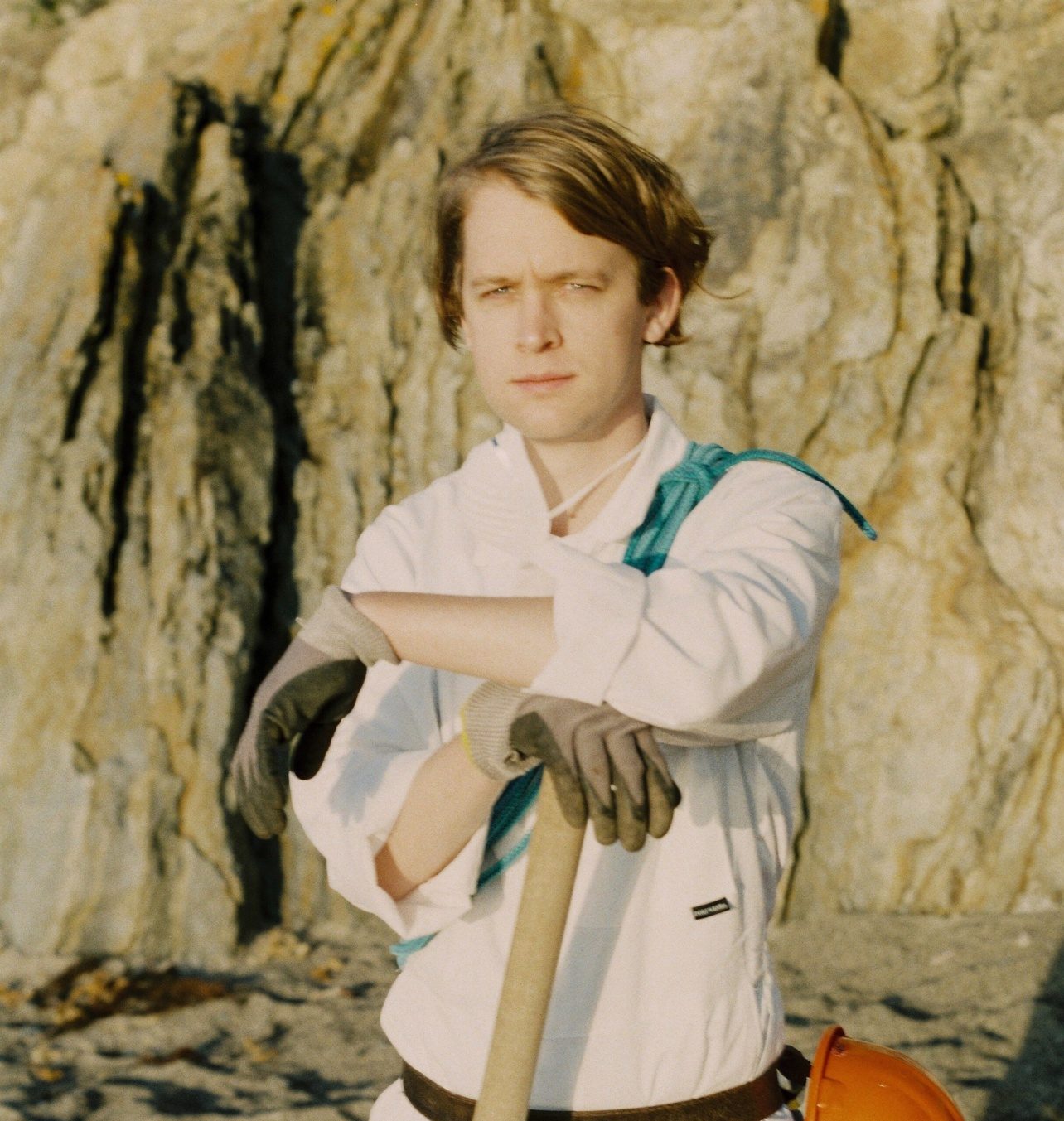 St Vincent is opening a champagne bar in London next month

Following the release of Tandem Felix’s debut album Rom-Com, Andrea Cleary caught up with David Tapley on the writing process, surrealism and romance

Since 2017, you went away to write an LP and emerged with two albums worth of material. What was the process of whittling that volume of music down to what became Rom-Com?

It became apparent pretty quickly which songs were the keepers and which were going into the pile. We recorded about 18 songs overall, and then whittled that down to 12. Two songs got cut right at the end, which was a tough call to make, like the Judgement of Solomon or something. But it had to be done! One song was ‘Birthday Boy’ which we already had released. The other song was one that we have been playing for a while called ‘The Assassination of President Music’, I’m sure it will see the light of day sometime soon.

What is this about these 10 songs that makes them belong together?

I think that the voice of the narrator is the same in each song. The concerns that he has, while different on each track, add up to one person, one viewpoint. It would be easy to say that he is a character and I have built a fictional world for him to exist within, but it’s more like “here are ten things I want to sing about: money, drinking, breaking up, working, etc.”

“It would be easy to say that he is a character and I have built a fictional world for him to exist within, but it’s more like “here are ten things I want to sing about: money, drinking, breaking up, working, etc.”

For an album so heavily influenced by country, there’s a fair bit of surrealism here too. Not least in the music video for ‘Oil Money’ – can you tell me about the concept for the video?

The video concept was created by the video’s director, Ror Conaty. I think he wanted to come up with a way of creating lots of transitions between the scenes the way that the music transitions drastically from section to section.

The title of the song is fun for me because, on the surface, it appears to be some sort of political comment on the oil industry or something. But it very much isn’t – it’s a front! It could similarly have been called “Lotto Money”, but that doesn’t have quite the same impact, does it?

On that basis, Ror Conaty (the video’s director) wanted to create lots of “fakeness”; fake desert background while we shot on the beach, fake eyes when I’m lying in the bed, lots of green-screen madness where I’m on a hoverboard in space. The money in the briefcase is real though. He was very trusting of me to like “make it rain” over and over again. 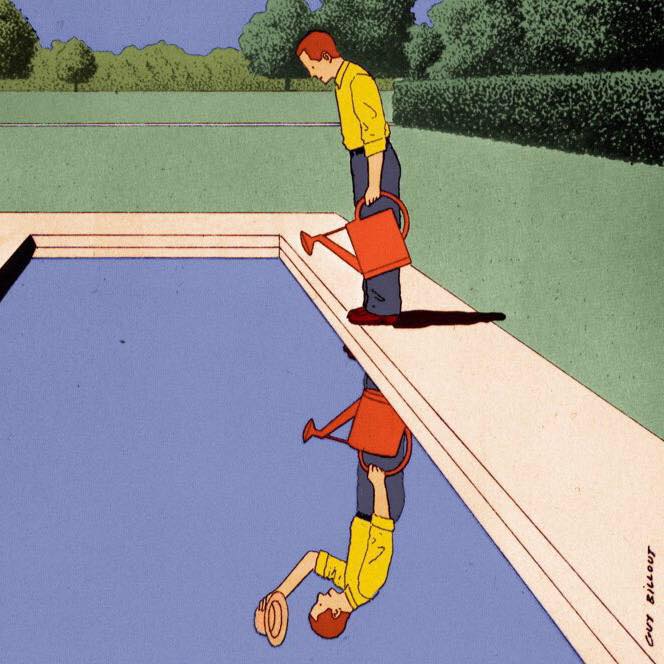 There are little easter eggs hidden here and there – a How Music Works book beside a tv for instance – were there particular books / artists you were engaging with while in the process of writing and recording?

I didn’t read a whole lot over the past while but I read “Confabulations”, one of the last works by John Berger. It’s a book of essays, which is maybe the closest literature ever comes to existing in the same form as the musical album. He’s got drawings and bits of poetry strewn throughout. He is a true storyteller, even if it’s the discussion of a painting or if it’s within some political writing.

I asked Ror what he thought and he sent me this:

“The books beside the TV are Laird Scranton’s “Sacred Symbols of the Dogon” which documents the Hieroglyphs of the Nomadic Dogon tribe and their claims to have originated from a planet orbiting the star Sirius. I felt this was fitting with the transcendent end of the video, maybe he’s smoking fatties out on Sirius! The second book is the Aaron Cometbus Omnibus, a collection of the famed Bay Area punk rock zines, this was a shout out to Oil Money’s sceptical and subversive tone. Lastly is David Byrne’s “How Music Works” what is there to say, David Byrne’s a legend!”

It feels like the story of each song is really what’s in the foreground – can you tell me about your lyric writing process?

The lyric writing process is probably the easiest part of my song-writing. At the moment, it’s very stream of consciousness. I try not to re-write anything, or change any of the grammar if I’ve messed something up initially. I love realising after-the-fact that I have made a mistake in a lyric. On this album, the song ‘Mother Teresa, the Butcher of Albania, Pt. 1’ has a couple of lines that tickle me pink like “While I was reaching feverous heights”, I think it should be “feverish heights” but that’s not what came out of my mouth when I sang it first. It’s almost like a sort of seal of authenticity, I hope people trust that if I don’t go back and re-jig my lyrics, that they can trust the things I am singing about.

You said that Rom-Com is a portmanteau for two polar sides of your personality – an idealist and a clown. Is our narrator a heightened version of these two aspects? Do you still recognise yourself in the songs, or do they have a life outside of you now?

I hope I am less of a clown and I admit that I have become more of an idealist. I can recognise myself in these songs, but they were written proverbial lifetimes ago. I have certain fond memories about the times that these songs were written about, certain musical triggers to Proustian-memories that take me right back. But I try not to look back and just concentrate on what I have taken with me.

“I hope I am less of a clown and I admit that I have become more of an idealist. I can recognise myself in these songs, but they were written proverbial lifetimes ago.”

How has the set-up changed since you were last playing live shows?

Neil Dexter of the band Spies has been playing with us as Jeffrey Courtney, who played the drums on the record, moved abroad a few years back. Other than that is much of the same. I tend to not look forward to playing live too much. I used to like it a lot more but now I feel it is somewhat of a necessary evil. We have been playing the “Rom-Com” songs for a few years now so I am looking forward to these shows though as it’ll be the first time people will actually recognise them.

It’s probably got to be Notting Hill. Hugh Grant pioneered the floppy-haired idiot that I developed my character on 15 years later.

Rom-Com is available to purchase and stream now.