I think I’ve found my favourite compilation of the year. A best-of compilation culled from the Ethiopiques series which has 25 releases in the series so far. A best-of a best-of if you will. Francis Falceto is the the compiler of the Ethiopiques series, most of which is taken from the golden era of Ethiopian and Eritrean music from the 60’s and 70’s. On the eve of the 1974 revolution the long regime of Haile Selassie ended yet launched the 18-year, socialist-military regime known as the Dergue which installed an 18 year continued curfew meaning no nightlife and a destroyed music scene.

The music is jazzy and funky and full of intriguing quality songs that show what a rich musical heritage the country has. Each compilation in the series focuses on a different region, genre, period or instrument of Ethiopia, while Volume 20 is a live CD consisting of a performance from the U.S. group Either / Orchestra who played at the Ethiopian Music Festival in Addis Ababa in 2004, the first such US band to appear in Ethiopia since Duke Ellington’s in 1973. Some of the music of Mulatu Astatke was used by Jim Jarmusch in his recent film Broken Flowers and it appears here also. Other artists who appear on the 2 CD collection are Mahmoud Ahmed, Tlahoun Gessesse (both of whom you can see below) Alemayehu Eshete, and Mulatu Astatqe. 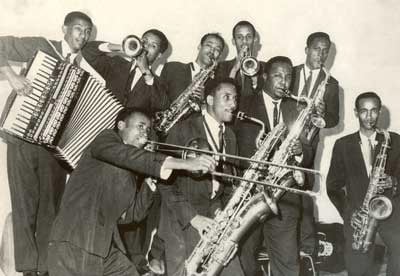 The Very best of the Ethiopiques was released last week – Buy it from Amazon. It’s a great intro to Ethiopian music of the period. For the more adventurous, a full list of CDs from the series is here and lots of them can be found on eMusic. More info at the official site and in these wonderful in-depth interviews with Francis Falceto.