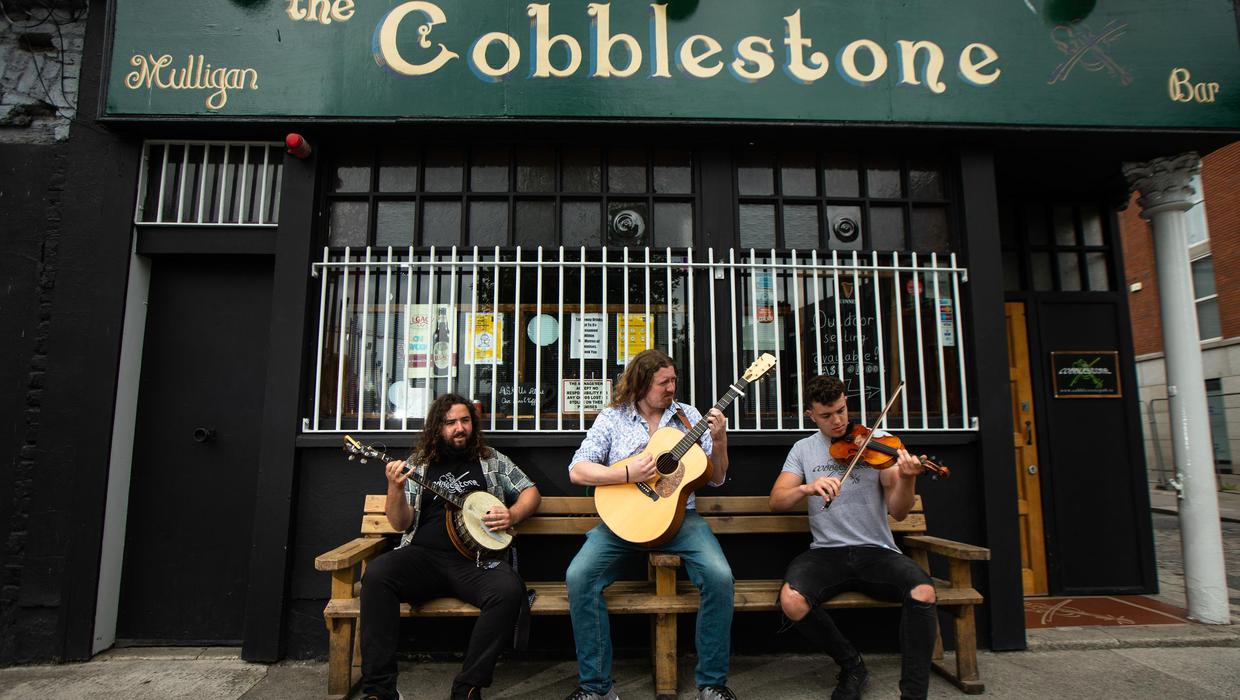 It is happening again.

Just a day after news emerged that Merchant’s Arch was under threat from being developed to accommodate a 4-story hotel development after An Bord Pleanála approved plans to do so (41,000 signatures have been gathered on Uplift so far), news emerged late yesterday that parts of the iconic Cobblestone Bar in Smithfield, which is a cornerstone of Ireland’s trad and folk music scene, is under threat from yes, you guessed it, another hotel development.

While the original building is a protected structure, the pub’s back bar and outdoor area would be demolished if plans to build a 9-story 114-bedroom hotel by Marron Estates Ltd. was to go ahead, essentially making Cobblestone a “feature” of the hotel, removing its venue space and outdoor area completely.

The Cobblestone is one of the most unique and culturally rich pubs of Dublin, and this would be yet another travesty – a cultural institution that would be given over to a cultureless hotel. The building is already a protected structure, it should be made a protected cultural institution too for what it does for trad musicians, and has been responsible for a new wave of artists like Lankum, John Francis Flynn, Skipper’s Alley, Ye Vagabonds associated with the venue.

“We’d just be left with the front bar, which is where we have our sessions. But we can only fit around 50 people in there. And if the hotel goes up around it, our bar would be turned into some sort of residents’ bar,” the Cobblestone’s assistant manager Adam Holohan told the Sunday Times.

The pub is operated by Tom Mulligan but owned by Peter Marron of Marron Estates Ltd, whose is the planning applicant, so it’s the building owner who wants to do this.

A planning notice was posted on Instagram by folk singer John Francis Flynn who wouldn’t have got to where he is (releasing on Rough Trade imprint River Lea, releasing one of the best Irish albums of the year in I Would Not Live Always) without have plied his trade in the pub.

Demolition of The Cobblestone to make room for yet another hotel. (This will involve demolition of the backroom venue, the smoking area, and the rooms upstairs where music and Irish language classes were held, leaving only the main bar swallowed up by a 9 story hotel essentially turning the leftovers into a residents bar)

We really need people to oppose this. The Cobblestone is far more than just a pub. It is a bastion of Irish culture. People come from all over the world to share and learn Irish music, song, dance, language and storytelling.

It is at the centre of this ‘folk revival’ we’re seeing in Ireland. The scene developed within those walls. Any fans of @lankumdublin @landless_music_dublin @skippersalley @lisaoneillmusic @yevagabonds @thebonnymenmusic need to know how important The Cobblestone is for this community.

Beyond that, and more importantly, the Cobblestone is the main hub for the broader traditional Irish Music community in the country. I have played with and learned from some of the very best musicians in the sessions. I have listened to some amazing music at The Night Before Larry Got Stretched sessions and Pipers Clubs gigs from musicians and singers you otherwise might never get a chance to hear. I have watched younger musicians develop into great musicians. I’ve watched dancers dance, singers sing, story tellers recite stories. There is nowhere else that can match the cobblestone for any of this and theres no place that promotes Irish culture to the same level as The Cobblestone. This is an attack on our culture in a City thats getting swallowed up by blind greed. We need as many people to oppose this as possible.

What you can do

A second Uplift campaign by District is here also.

As Aoife points out, you can also object to the planning permission here, and here is what is required. The last day for observations is November 4th.

What you definitely can do is give your opinion on the proposed planning application here so the council can see the strength of opinion https://t.co/0RQmguo5zN

Here’s the planning application, in full:

The development will consist of: The demolition of the existing modern extensions to no. 77, the total demolition of no. 78 and 79 North King Street and the retention and alteration of the protected structures at no. 77 and 80 King Street North to facilitate the construction of a 8.9m – 28m (above ground level) part-3 to part-9 storey 5,818 sq.m. hotel building comprising: (i) linen stores, a luggage store, toilets, and comms room at basement level; (ii) a lobby, reception area, bar/restaurant facilities (including the retention of the existing Cobblestone Public House), toilets, a bar store, housekeeping store, food preparation area, a bin store and switch room at ground floor level; (iii) kitchen, and cold storage area, ancillary offices, staff facilities including locker area, a break area and toilet and shower facilities, at first floor level; (iv) 114-bedrooms arranged over floors 2-9 with maintenance and a cleaners storage areas located at third and fourth floor level; (v) plant room located at fifth floor level; and (vi) lift overrun, plant room and green roofs at roof level.

The development also includes the following works to no. 77 and 80 King Street North:

No. 77 King Street North – New independent structure to be installed to rear and side of existing original house, existing staircase from ground to second floor to be removed, new opening to be formed in west elevation (former party wall), existing (non-original) openings in west elevation at first and second floor level to be blocked up and hotel bedrooms with En Suite bathrooms to be installed at first and second floor level in the Protected Structure.