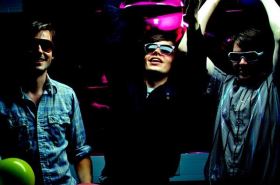 Tomorrow (Tuesday) sees the announcement of the shortlist for the 2009 Mercury Music Prize and the BBC Music Blog have asked various blogs (myself included) to give their thoughts on a possible shortlist. The Mercury Prize is awarded to albums of any genre, with the only key entry condition being that they had a UK/Ireland release between July 15 2008 and July 13 2009 (full rules here). Where possible, I’ve linked the album name to the Spotify page so you can listen yourself. So let’s start building my list:

My Favourites:
Without a doubt, my favourite UK album of the last year is Friendly Fires self-titled debut, followed by alternative turns by Micachu and the Shapes’ Jewellery, The Phantom Band’s superb Checkmate Savage and the epic histrionics of Fanfarlo’s Reservoir. Only Friendly Fires seems likely to appear on the list. Foals‘ Antidotes doesn’t count as it was released last March yet criminally ignored by last year’s list.

The Girls:
With all the dumb buzz around female artists being UK’s brightest hope in 2009 and with positively received albums from La Roux (La Roux), Little Boots (Hands) and Florence & The Machine released recently, I fully expect at least one, if not all three get a place on the shortlist of twelve. You can’t discount Bat for Lashes‘ Two Suns for a strong placing this year after being nominated two years ago and being very close to winning it in the same year Klaxons won the prize.

Indie & Rock
Glasvegas, Franz Ferdinand, The Maccabees, White Lies and Golden Silvers have all released possible albums while on a lesser known-scale albums by Late of the Pier, Gallows, Broken Records, We Were Promised Jetpacks and The Invisible are all outside possibilities. The biggest surprise of the year is The Horrors‘ Primary Colours which would be a shame not to get a nod.

Pop
Any room in there for Lily Allen, a really good album from Jack Penate or a stylistic turn from The Noisettes?

The Old Guard
Doves are currently one of the favourites to be nominated for their Kingdom of Rust album. Is this a “recognition of their entire body of work” kind of year and if so will Manic Street Preachers receive a nomination for Journal For Plague Lovers? Is the Super Furry Animals Dark Days/ Light Years album good enough to earn a nod? My gut sadly says no.

“Urban”
What will this year’s urban representative be? The dubby electronica of The Bug’s London Zoo? A pleasant hip-hop album in Speech Therapy from the young Speech Debelle? Roots Manuva’s Slime and Reason? Or that record’s producer striking out on his own – Toddla T with Skanky Skanky.

Irish
Are any Irish artists willing to pay the £195.50 submission fee for entry to the Mercury? My only bet this year would be Lisa Hannigan who’s had a superb year touring her Sea Sew album with appearances on Jools Holland amongst them. Could Lisa be this year’s Fionn Regan?

Wildcards
These guys don’t fit into the other categories so apart from the now-near standard non-popular jazz/folk “never-heard of before” entry could there by space for Bibio’s Ambivalent Avenue, The Mummers Tale to Tell, Camera Obscura’s My Maudlin Career, Blue Roses Blue Roses?

So what do you think?