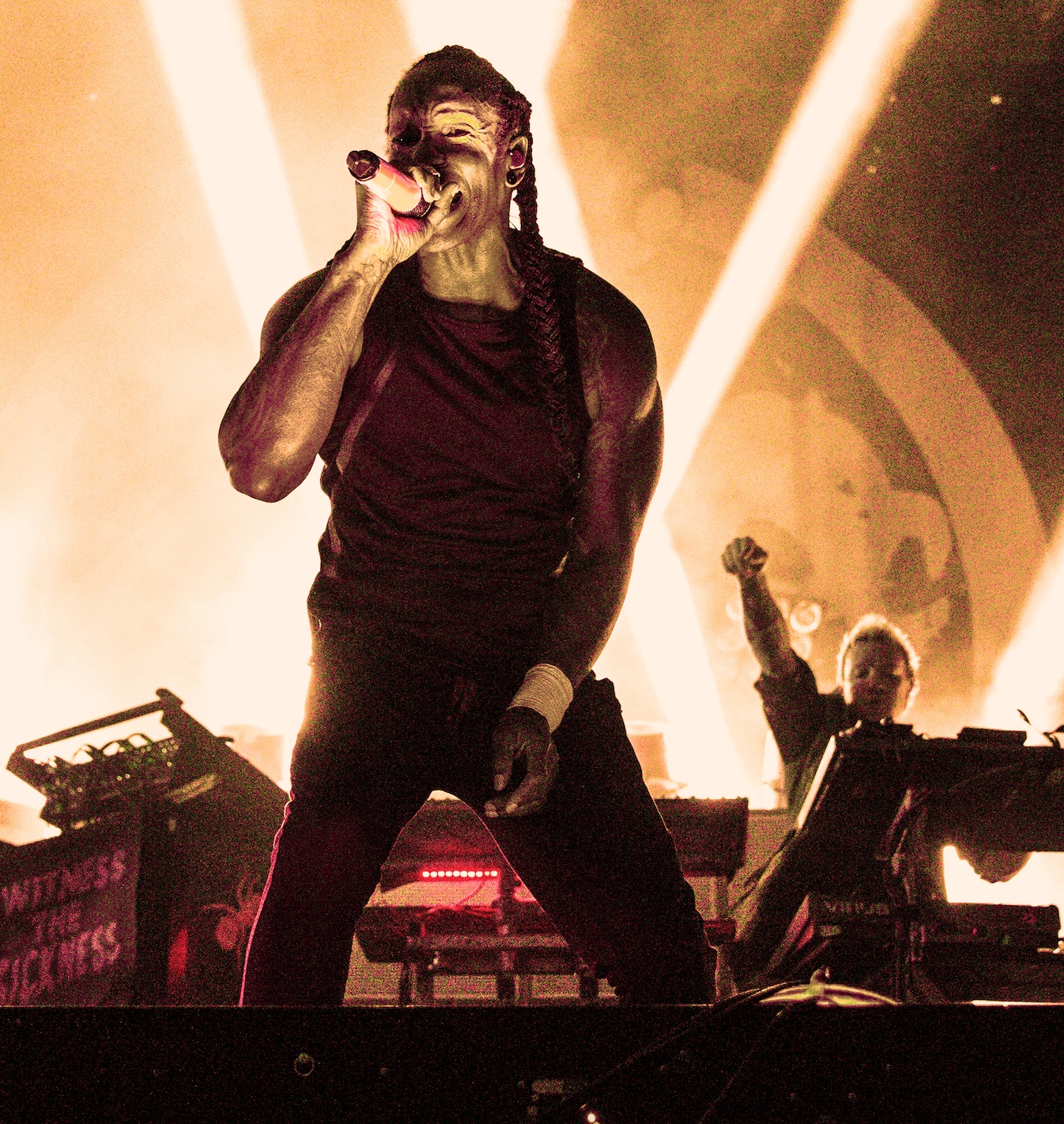 The Prodigy have had a triumphant return to live music this summer, after the passing of Keith Flint in 2019. The Guardian said of their UK show it was “a comeback show that proves the fiery veterans are still a source of euphoria“

Liam Howlett, Maxim, guitarist Rob Holliday and drummer Leo Crabtree make up the live band these days and Liam said of the gigs:

“We always said from the start, as long as the people wanna see us, we will be there for them , to play our tunes live with full power and much rukus.”

The band have lined up three Irish dates next year

Tickets From €59.90 plus fees on sale this Friday At 9am from Ticketmaster.ie

The Prodigy Biography by John Bush
The Prodigy navigated the high wire, balancing artistic merit and mainstream visibility with more flair than any electronica act of the 1990s. Ably defeating the image-unconscious attitude of most electronic artists in favor of a focus on frontmen Keith Flint and Maxim Reality, the group crossed over to the mainstream of pop music with an incendiary live experience that approximated the original atmosphere of the British rave scene, even while leaning close to arena rock showmanship and punk theatrics. Yet it was always producer Liam Howlett’s studio wizardry that launched the Prodigy to the top of the charts during the late-’90s electronica boom, spinning a web of hard-hitting breakbeat techno with king-sized hooks and unmissable samples.

The Fat of the Land
Despite electronic music’s diversity and quick progression during the ’90s — from rave/hardcore to ambient/downtempo and back again, thanks to the breakbeat/drum’n’bass movement — Howlett modified the Prodigy’s sound only sparingly; swapping the rave-whistle effects and ragga samples for metal chords and chanted vocals proved the only major difference in the band’s evolution from their debut to their worldwide breakthrough with third album The Fat of the Land in 1997. Even before the band took their place as the premiere dance act for the alternative masses, the Prodigy had proved a consistent entry in the British charts, with over a dozen consecutive singles in the Top 20.

Howlett, the prodigy behind the group’s name, was trained on the piano while growing up in Braintree, Essex. He began listening to hip-hop in the mid-’80s and later DJed with the British rap act Cut to Kill before moving on to acid house later in the decade. The fledgling hardcore breakbeat sound was perfect for an old hip-hop fan fluent in uptempo dance music, and Howlett began producing tracks in his bedroom studio during 1988. His first release, the EP What Evil Lurks, became a major mover on the fledgling British rave scene in 1990. After Howlett met up with Keith Flint and Leeroy Thornhill (both Essex natives as well), the trio formed the Prodigy later that year. Howlett’s recordings gained the trio a contract with XL Records, which re-released What Evil Lurks in February 1991.

Six months later, Howlett issued his second single, “Charly,” built around a sample from a children’s public service announcement. It hit number one on the British dance charts, then crossed over to the pop charts, stalling only at number three. (It wasn’t long before a copycat craze saw the launch of rave takeoffs on Speed Racer, The Magic Roundabout, and Sesame Street.) Two additional Prodigy singles, “Everybody in the Place” and “Fire/Jericho,” charted in the U.K. during late 1991 and early 1992.

Experience
The Prodigy showed they were no one-anthem wonders in late 1992 with the release of The Prodigy Experience, one of the first LPs by a rave act. Mixing chunky breakbeats with vocal samples from dub legend Lee “Scratch” Perry and the Crazy World of Arthur Brown, it hit the Top Ten and easily went gold. During 1993, Howlett added a ragga/hip-hop MC named Maxim Reality (Keeti Palmer) and occupied himself with remix work for Front 242, Jesus Jones, and Art of Noise. He also released the white-label single “Earthbound” to fool image-conscious DJs who had written off the Prodigy as hopelessly commercial. Late 1993 brought the commercial release of “Earthbound” (as the group’s seventh consecutive Top 20 singles entry, “One Love”).

Music for the Jilted Generation
After several months of working on tracks, Howlett issued the next Prodigy single, “No Good (Start the Dance).” Despite the fact that the single’s hook was a sped-up diva-vocal tag (an early rave staple), the following album, Music for the Jilted Generation, provided a transition for the group, from piano pieces and rave-signal tracks to more guitar-integrated singles like “Voodoo People.” The album also continued the Prodigy’s allegiance to breakbeat drum’n’bass; though the style had only recently become commercially viable (after a long gestation period in the dance underground), Howlett had been incorporating it from the beginning of his career. Music for the Jilted Generation entered the British charts at number one and went gold in its first week of release. The album was also nominated for a Mercury Music Prize as one of the best albums of the year.

The Prodigy spent much of 1994 and 1995 touring around the world, and made a splashy appearance at the 1995 Glastonbury Festival, proving that electronica could make it in a live venue. The group had already made a transition from the club/rave circuit to more traditional rock venues, and the Glastonbury show set in stone the fact that they were no longer just a dance group. Flint’s newly emerged persona — the consummate in-your-face punk showman and master of ceremonies for the digital-age crowd — provided a point of reference for rock critics uncomfortable covering Howlett (whom they saw as a glorified keyboard player).

The Dirtchamber Sessions, Vol. 1
The Prodigy’s incessant road schedule left little time to record, but Howlett managed to bring out the next new Prodigy single in March 1996. “Firestarter” entered the British charts at number one, though the video was almost banned due to complaints about arson fixation; many Top of the Pops viewers also complained that Keith Flint had scared their children. An unmissable guitar hook and Flint’s catcall vocal antics — his first on record — made it a quick worldwide hit, and though “Firestarter” wasn’t a major success in the U.S., its high-profile spot in MTV’s Buzz Bin introduced the Prodigy to many Americans and helped fuel the major-label push for electronica during the following year (though the Prodigy did reject collaborative offers from David Bowie, U2, and Madonna). In the middle of the electronica buzz, the Prodigy dropped their third album, The Fat of the Land. Despite rather obvious attempts to court mainstream rock fans (including several guest vocalist spots and an L7 cover), the LP entered both British and American charts at number one, shifting several million units worldwide. The next Prodigy full-length was 1999’s The Dirtchamber Sessions, a mix album helmed by Howlett.

Always Outnumbered, Never Outgunned
The “Baby’s Got a Temper” single — one Howlett would later disown — appeared in 2002, and soon after Leeroy Thornhill left the band. Maxim and Keith Flint were still in the band, but they weren’t to be found on 2004’s Always Outnumbered, Never Outgunned. Instead, the album featured guest spots from Oasis’ Liam Gallagher, Kool Keith, Twista, and actress Juliette Lewis. Flint and Maxim did join Howlett for a worldwide tour to support the album that launched in October 2004. Five years later, Invaders Must Die signaled a return to the rave sound of their debut, and also found both Flint and Maxim back as core members. The lead single, “Omen,” reached number three on the British charts prior to the album’s release, and Invaders Must Die debuted at the top spot on the British album charts. The live album World’s on Fire followed, recorded in 2010 at the Prodigy’s own Warrior’s Dance festival.

The Day Is My Enemy
Early in 2015, the group announced their sixth studio album, The Day Is My Enemy. Preceded by the single “Nasty,” the album featured guest appearances from Sleaford Mods and Flux Pavilion. Soon after, Howlett announced his intention to stop releasing albums and only put out EPs, with the promise that new music would arrive the following year. However, no EP ever materialized. Instead, years passed until 2018, when the Prodigy announced that they had signed to BMG Rights Management and would, after all, release another album. This seventh set was heralded by the singles “Need Some1” and “Light Up the Sky.” Accompanied by guest artists Ho99o9 and Barns Courtney, No Tourists appeared that November and marked a return to a more synth-driven, less “rock,” though no less aggressive sound. Their sixth consecutive U.K. chart-topper, No Tourists was supported by a brief international tour, which included plans to tour the U.S. in 2019. However, on March 4, Flint was found dead at his home in Dunmow, Essex; he was 49.