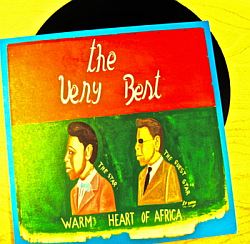 Esau Mwamwaya and Radioclit’s debut album proper as The Very Best is a few weeks away from physical release at this stage, September 11th to be exact and the label have offered up two sets of goodies as tasters. First up, an 8-minute megamix/teaser/preview of every song on the album and secondly, a download of the limited seven-inch vinyl now available on Green Owl with the Vampire Weekend Ezra-featuring ‘Warm Heart of Africa’ backed with ‘Yalira’, the previously unreleased album opening track.

After being initially underwhelmed by the album (compared to the mixtape), i’ve warmed to it considerably since. M.I.A. features on a track but it’s all about Esau’s positive African vibe.

Don’t forget about the excellent ‘Warm Heart of Africa’ remixes I posted a while back.