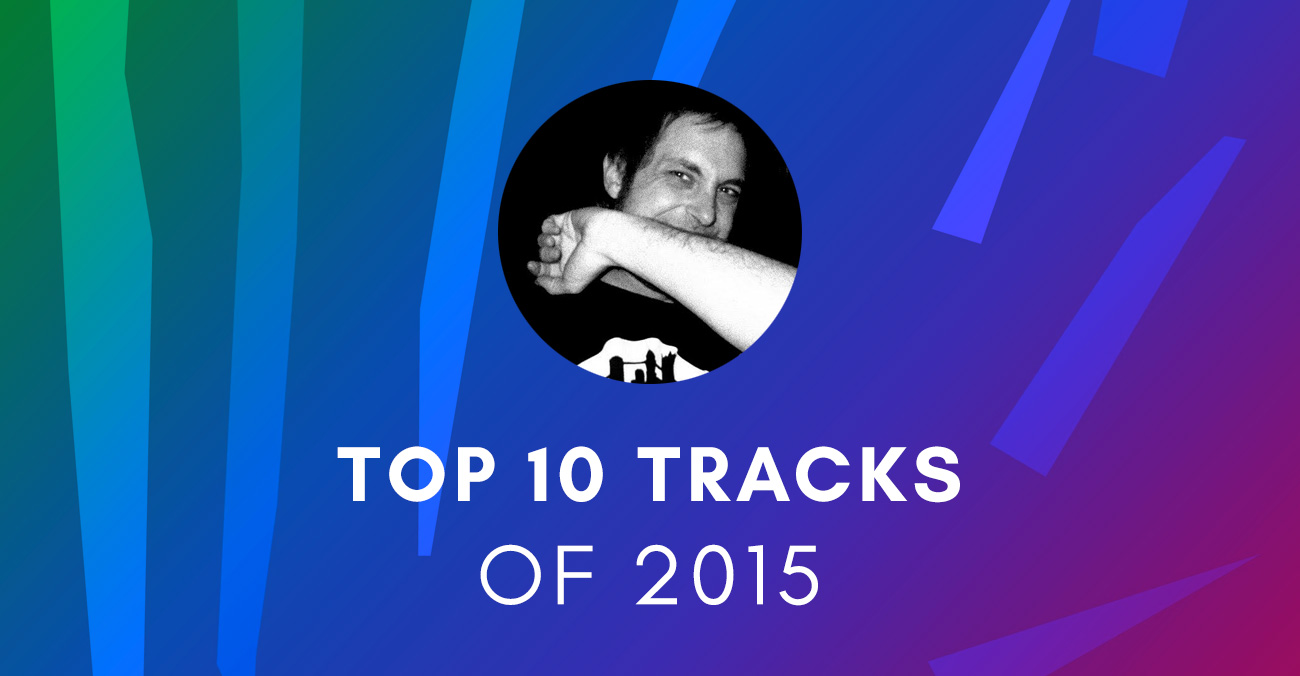 Kenny Hanlon is a DJ and the boss of Apartment Records, who released one of my favourite records of 2013. The label’s next one is Steve Legget feat. Greg Blackman and you can catch him DJing at Bloc in March. Here are Kenny’s top 10 tracks of 2015 as part of the Best of 2015 series.

It sometimes feels like this Detroit producer has for the last 20 years been hell bent on keeping his profile as low as possible. This record seemed to be floating in the ether for months before finally going on full release during the summer. Classy house (techno? who cares) bristling with funk and swing from a man who deserves far more coverage than the PR firm driven ten-a-penny chancers who clog up the machine.

Omar S’ vocal records don’t always work for me, but this is probably the best he’s put his name to and I reckon it’s the vocal dance track of the year. James Garcia on the hunt for some good, greasy lovin’ owns this record. It also contains one of the most pointless tracks released this year, the instrumental on the flip side. Definitely one of those situations where if the DJ drops the instrumental you are well within your rights to go up to them and give ‘em a right dirty look. Maybe even knock the needle off too, so they cop on and flip it over.

I don’t really pay attention to modern pop music nor do I care about including “token” records in these lists. The idea of guilty pleasures is a bit pointless and even worse is wannabe post modern ironic bollox like PC Music. I heard ‘I Really Like You’ in my local shop (corner shop, not record shop) one day and like the best earworms it had drilled its way right into the centre of my brain within 5 seconds. I recognised Jepsen’s voice from her 2011 banger extraordinaire ‘Call Me Maybe’ so I had a few blasts off the Emotion album when I got home, discovering it to be pretty ruthless. The opening trio, including ‘I Really Like You’, is especially full on so I’m gonna stick with it as my pick. With underground electronic music’s penchant for po-faced self absorption being embraced so much this year maybe it could do with some Tom Hanks-choreographed dance moves in its music videos, instead of some miserable quasi-fascist stock footage.

Paxton Fettel – Dots on the Skyline

Watching great releases being slept on is an inevitable part of being a music nerd but when you see inferior music get praised to the nines it can get frustrating. You have the likes of Jack J and the Mood Hut crew sending everyone into a tizzy yet the organic, hazy funk and house of Paxton Fettel is all but ignored, even though in my opinion his slightly more lugubrious productions are more rewarding. I guess being from Denmark isn’t as cool as being from Vancouver. “Everything Stays The Same” was my album of the year and I could have gone with nearly any track off it, but today I’ve decided to choose ‘Dots on the Skyline’. The vinyl came with some really sumptuous packaging too.

Without a doubt the most aptly named track of 2015. Imagine Phuture shotgunning cans of Tennants Super and repeatedly headbutting their hardware and you’ve got The Fuck. It’s rare that you’ll have a record that can induce fairly intense nausea whilst also giving you the urge to strip down to your y-fronts and douse yourself in Tesco Value cooking oil. It’s so greasy that it makes the Jamal Moss remix on the flip seem tame.

Somewhat akin to climbing up a hill of mud somewhere in Bavaria while a willowy chanteuse beckons you from the top, after a few minutes you realise that it’s actually quite glorious being knee deep in the ooze and upon reaching the summit you let the rest of Mick Will’s infectious edit work just slide all over you.

I can’t stand Drake. From his gobshitey howling he calls mcing to his stupid beard to his tough guy (with feels!) shtick even though he’s a second rate tv actor from Canada. He seemed to get involved in some online beef with some other MC earlier in the year that was clogging up my twitter feed for a day yet if there’s anyone getting served this year it’s Drake, by Erykah Badu, with his own tune. Her delivery is so slick, that what seems like a near straight cover just becomes so much more enveloping. Especially so after the great midsection, the Andre 3000 sample and the wonderfully dusky conclusion.

The Hieroglyphic Being Experience – John Heckle Signal to Noise Re:Vision

Once again Jamal Moss (Hieroglyphic Being) is runner up on a release in this list. It’s fine though, he probably released about 20 other albums of scattershot whatthefuckery this year that the writers for The Quietus and Wire furiously masturbated over in their cold, dank bedsits. I, on the other hand, could be found shimming around my own cold dank bedsit to this rugged but beautiful remix from John Heckle, a career peak for the ever evolving Liverpudlian. A lot of the greatest techno casts a melancholic shadow over the dancefloor, and this sits side by side classic material by the likes of Derrick May and Shake Shakir.

Languid saxophone riffs. Not quite as on trend this year as warbling analog synthesisers or leaden “industrial” kick drums but it seems US trio Pharaohs never got the memo. Here they are at their most balearic, slowly but ever so surely teasing out 10 minutes of exhilaration to soundtrack you stumbling over to the poolside cocktail bar for the 6th time, burnt to a crisp on a package holiday in Faro. Pure bliss.

There was a lot of discussion this year about the representation of female artists in club culture and electronic music be it in club bookings, festival line ups, studio releases and so forth. Yet I don’t recall Belgian producer Mariska Neerman’s split 12” with Dj Stingray coming up much, even though she is certainly a hugely promising talent. Maybe she doesn’t move in the right circles or shout it out loud enough on social media. Her music is similarly unshowy and while Atê may not seem like the most obvious selection, it’s that sort of timeless electro / techno music that I love and one can come back to years later and it won’t sound dated. It’s always important to highlight the upcoming / new talent alongside the 20 year veterans. Especially those who don’t got hype.