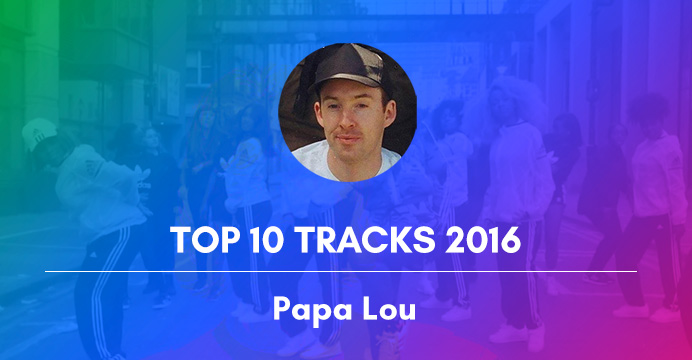 Louis Scully aka Papa Lou is a DJ and promoter of various Dublin nights including Discotekken, Telephones, The RnB Club & The Pictures. Here are his top 10 tunes of his year.

Aged In Melody – Theme For Someone Special [2016 reissue]

This soulful ’70s disco instrumental is stunning. It actually makes me feel sad, but I’m quite happy to be sad occasionally for a 4 minute stretch. Never heard so much emotion in a piece of instrumental music before. Properly released as part of a killer triple 7″ package by Floating Points.

This is one of the best house tunes out in years IMO. Bouncy and fun and irreverent – the complete antithesis to all the boring stuff out nowadays. Local Dublin young fellas responsible. Man of the moment Nevan Jio played it in a back to back mix we did for Daire All City. COYBIG. Hup.

Donna Summer tune chopped up into a house anthem. Popular song this year!

Young lad is doing really well & deserves it, got himself a nice clean sound. It’s not exactly new territory in the grand scheme of things, but he’s a talented DJ & producer and that’s all that matters..

Sleazy electric guitars have found their way back into rnb / pop! This is a slow jam banger. I love how RiRi can put out super downtempo tunes that become anthems. This is like golden era Daft Punk + 2016 trap + 1980s Miami. Works a treat.

A Tribe Called Quest – We The People

This, a thousand times this.

I rinsed this one on Sunday night at EP and a few more times throughout the year. Mood II Swing got extensively reissued this year and began touring (again?). Fair play to them. Unce unce. Yup yup.

Originally released in the mid ’90s, this unusual uptempo hit was as good as reissued this year, as it popped up in a viral video online and then reappeared everywhere again. Special mention to KP & Envyi – Swing My Way which came out a couple of years later, on a similar tip.. it even touches on a UK Garage vibe which is cool!

This came out in 1979 but it’s one of my most played out tracks this year. Been on a huge Love Unlimited (Barry White’s band) tip over the past 12 months. Proper late ’70s, lush, string-laden disco about being a woman and loving it. What’s not to like.