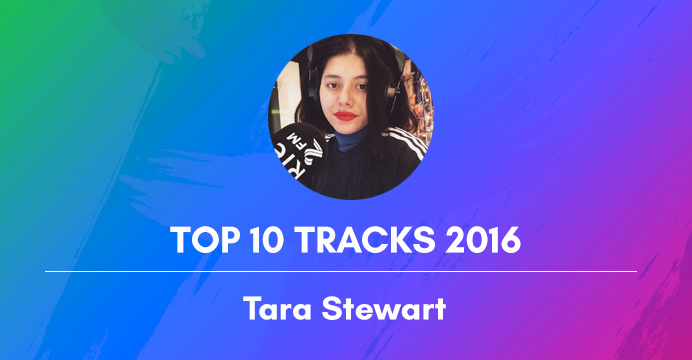 Tara Stewart is a DJ and radio presenter with 2FM /2XM, a writer with District Magazine and top buzzer.

Nadia Rose is an artist I’m love so much (I’m a bit too obsessed with her actually). She has so much swag, style and effortless talent. When I heard this song I was like, man I wish I could rap like that (or rap in general I should say). Every song she’s featured on or released so far has been a great track.

I’ve been a huge fan of Susanne Sundfor’s vocals and original music for ages (listen to ‘Ten Love Songs’ you might cry a lil so sorry in advance).
Susanne featured on a soundtrack by M83 for a Tom Cruise movie called Oblivion, the song is also called Oblivion. I heard it and I was like ‘oh my god this track is unreal’. So I decided to go to the movie because the song was so epic and you’d assume the film would be just as epic and exciting.

I went to the movie by myself…fell asleep for a few minutes and woke up and left half way through ,the movie was absolutely horrific (I won’t apologise). But the only positive from it was I was introduced to Susanne Sundfor and fell for her music deeply. To cut an already long story short…this Royksopp track ‘Never Ever’ is brilliant and I love it.

Keke has been around a really long time mostly in acting and starting off as a Disney star and onto many other teen tv shows. But for somebody that is such a mainstream star, her new music is really not mainstream and she’s really refreshing. I heard this song and watched the video and just fell for her. Side note, her style is very fab too.

Skepta is just fantastic, I have a lot of love for him and I’m so happy to see him finally getting amazing recognition for his work. I saw him at Electric Picnic and it was one of the best gigs I’ve been to. To be honest, it was hard for me to pick one particular song off Konnichiwa but this is definitely on rotation between a couple of favourites.

I’m a pretty new fan of D.R.A.M, not because I wasn’t a fan of his before but I only heard of him this year. All I can say about this is as soon as I heard it I got halfway through and restarted it because I was like, oh shit….this is fantastic. The rest of his album is just as good. But this is my top song.

Again I’m a new fan of Banks, and this time it’s because I actually wasn’t a fan of her previous album, I just couldn’t jump on board. However, things changed dramatically when I heard this song, so much so I’d safely say I’m her biggest listener on Spotify.

I’ve been a massive fan of Faye O’Rourke’s songwriting and singing for a long time. Her vocals are just out of this world (and I don’t use that dramatic phrase lightly). I got a sneaky listen of this before it came out, but like a year in advance and I was actually raging because I wanted it to myself so I could listen over and over. Unfortunately I had to be patient and wait for the full album.

Bruno Mars – Calling all my lovelies

I have absolutely no shame in saying his new album is one of my favourite albums of 2016. It’s just fun and brilliant. This song is pretty cheeky but Bruno is just a cheeky dude (heya Bruno 😉 ). Don’t knock this song or the album just yet if you haven’t listened, just because it’s Bruno Mars. Give it a chance and I hope you enjoy it as much as I do.

Mabel – Thinking of you

Mabel is pretty new and still unknown in the music world but she is another artist that I really believe is set for massive things next year. She is creating deadly music with a heavy sprinkle of 90s rnb in there too. She’s the daughter of Neneh Cherry, but EXTREMELY talented in her own right.

These guys have had an absolutely massive 2016 and with the way things are going, I hope 2017 is even bigger. This has to be my favourite song so far released, but I’m just dying for an album because I want to hear more.