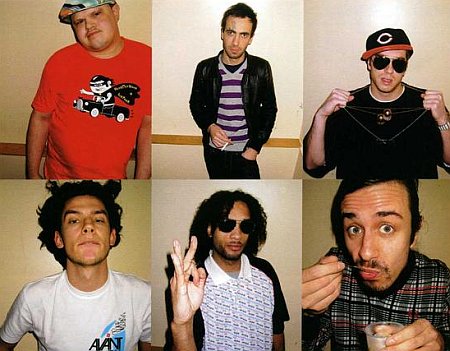 French hip-hoppers and all around mentalists, TTC released their third album 3615 a few weeks back. This is no regular hip hop album though and certainly has little in common with most people’s peception of French hip hop. It’s closer to the electro sound of Berlin’s Modeselektor who produce the album’s closer, returning the favour of TTC’s appearance on Hello Mom’s “Dancing Box”.

The album is littered with vintage sounding synths and electro beats and of course, TTC’s unique rapping styles. It opens with the one-two punch of “Quand Je Claque mes Doigts” and an ode to their city with “Paris Paris”. It just gets better from there. “Telephone” sounds like the kind of song Diplo has been knocking out lately – in other words a bit of a monster party tune, “Turbo” is strange yet wonderful – musically sounding somewhere between M83 and Nathan Fake while Modeselektor’s production tears the roof off “Une Bande de Sympa” which can viewed as Dancing Box part 2.

With a production team of Para One, Orgasmic, Tido, Tacteel and Modeselektor, there is plenty of variation in pace and tone to keep the album interesting but it always retains that core electro hip hop sound. Paris has been making a resurgence in relevance in dance music of late with Ed Banger records high profile releases and remixes (think Justice, Uffie, SebastiAn) and TTC are feeding straight into their country’s resurgence here. Awesome.

Hilarious video for “Telephone” too!

Get the album: Amazon | iTunes