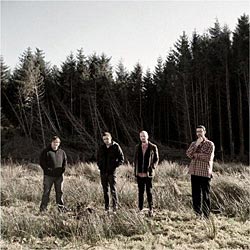 The Twilight Sad remixed fellow Scots Errors earlier in the year by turning the opening track of their Come Down With Me album ‘Bridge or Cloud’ into a moody drone piece negating the happier parts of the song.

This time around Errors did the remix work for The Twilight Sad’s upcoming EP The Wrong Car, which features two new tracks and remixes from Errors’ and their label bosses Mogwai. The EP will be released on digital and 12″ on July 26th through Fat Cat Records. The Errors remix features the synth and percussion traits that the band’s recent album cemented in their style.

The Twilight Sad – Reflection Of The Television (Errors remix)