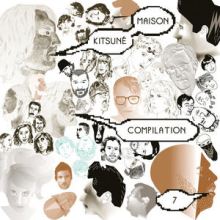 I was listening to the rather front-loaded Kitsuné Maison 7 compilation last night and it reminded me of this great track from Bangor’s Two Door Cinema Club.

It’s a stonking indie-pop number which is a prime example to the gazillion indie bands out there how you can learn from bands like Phoenix (aside – how awesome of a tune is ‘1901’? Very is the answer.) and craft a decent tune alongside a decent producer – in this case Lexx. It’s even got an almost Bewitched-type “Go! Go! Go!” breakdown. What’s not to like?

As for the Kitsune comp – there are tracks from We Have Band, That killer Lisztomania remix from Classixx (FYI – The term “Lisztomania” was coined by the German romantic literary figure Heinrich Heine to describe the massive public response to Franz Liszt’s virtuosic piano performances, thanks Wikipedia), The Golden Filter, La Roux, Autokratz, James Yuill and others but it’s mostly forgettable. Here’s a minimix for a taster. It’s out now in advance on eMusic.