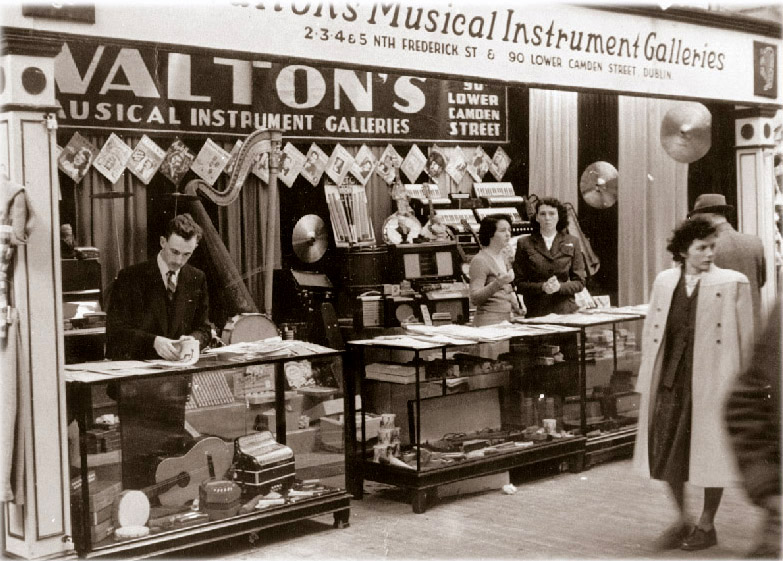 Did you know the iconic music shop Waltons is celebrating being open for 100 years this year? You might not know that the shop has a storied history to it.

Waltons is a Dublin institution, not just a music one.

And despite closing its city centre business in 2018, thefamily-run shop is still going strong in Blanchardstown.

It was founded by Martin Walton in 1922, the same year as the Irish Free State. At the age of fifteen Martin, already a member of the Irish Volunteers, took part in the Easter Rising of 1916 and later fought in the Irish War of Independence. During the war, Martin was arrested and imprisoned in Ballykinlar internment camp in Co. Down, where he founded and ran the camp orchestra.

Here’s a picture of the orchestra:

In 1922 Martin turned to his love of music and opened Waltons first Music store on North Frederick Street, Dublin 1, which would remain in that location until 2013.

Waltons New School of Music which was opened in 1994 on South Great Georges Street two years after the iconic Waltons outlet on the same street (which was featured in the film Once) and shops were later opened on Frederick street, Navan, Camden Street and were later consolidated into its current superstore in Blanchardstown, and its online store.

As well as the physical shops, Waltons has also manufactured musical instruments, from harps to tin whistles, recorded Irish music on their label, published music books to teach Irish music and songs, run a sponsored radio programme of Irish music for over 30 years and run music schools that to this day educate many of Ireland’s musicians.

Waltons New School of Music provides musical classes and workshops, along with numerous external programs such as The Waltons World Masters Series, Waltons Music for Schools Competition, Music at work programs. Additionally, Waltons NewSchool of Music offers outreach programs, that attract over three thousand students each year of all ages and skill levels, and offers tuition in the widest range of instruments and music genres of any school in Ireland.

Niall Walton is the Managing Director of Waltons and says of their centenary achievement:

“From listening to its founder Martin Walton and his son, my father, Patrick Walton to now watching my children, Waltons Music’s fourth generation as they work to service the music industry in Ireland to the best of their ability, it has been a privilege to have a bird’s eye view of the great developments in the music industry in Ireland”. Additionally, he added that “We feel that the history of the company and its evolution reflects many of the changes that have occurred in the Irish state over the last 100 years and that we hope to have a place in its future for another few generations”

To celebrate their 100th birthday in business, Waltons Music have given us a €250 voucher to one lucky Nialler9 reader. All you have to do is head on over to the Instagram post and follow the instructions to enter to be in with a chance to win. Competition closes on Friday January 21st.