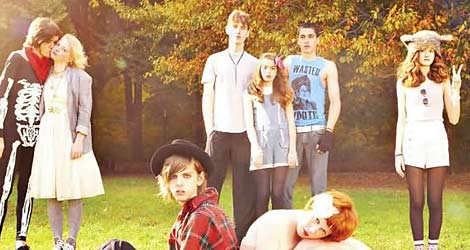 This was prompted by the rather wonderful new M83 track ‘Kim & Jessie’ which was obviously directly inspired by all things adolescent and 1980s. There’s been a bit of a non-ironic 80s revival going on lately with stuff like Neon Neon par example. Before that we had Donnie Darko and its distinctive soundtrack which is referenced on the Saturdays=Youth cover art along with The Breakfast Club.

Whether your cheese of choice is Rico Mambo, ‘Live to Win‘, ‘We Built this City‘, A Flock of Seagulls, ‘Don’t You Forget About About Me‘ or Final Countdown, spill your guts in the comments – What are your favourite cheesy 80s songs?

Here’s one to get you started along with the inspiration for the post..

I’m off to London to do visuals for the Bonus Party, see you on the other side!

Hawt: Schmackey and the Salads