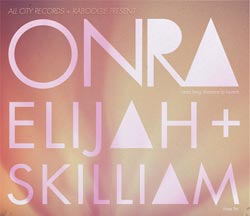 Friday night sees !Kaboogie and All City combine to bring three influential producer/DJs in grime and hip-hop in Elijah & Skilliam and Onra respectively in the Twisted Pepper. Elijah & Skilliam run the best grime blog going – Butterz , appear on Rinse FM regularly and have started a vinyl label with Terror Danjah as the first release on the label.

French producer Onra meanwhile is launching his album Long Distance which has the brilliant track featuring Olivier Daysoul (below) on it.

I’ve got two pairs of passes to giveaway to the gig which kicks off tomorrow night at 10.30pm, just holler in the comments by 1pm tomorrow and I’ll notify the winners shortly afterwards.