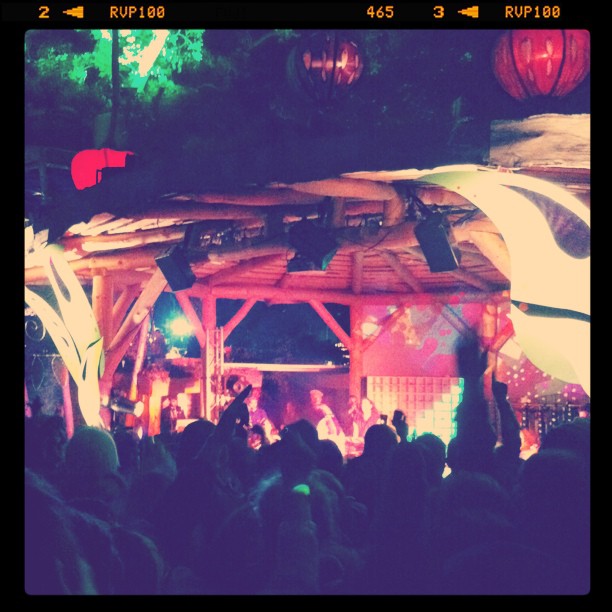 Here’s a look at the 15 bands I saw over the weekend at Electric Picnic 2011 that impressed me the most. There was lots of other sets I enjoyed but these were my personal favourites. All the good photos are by Damien McGlynn (apart from the crappy Best Coast one – that was me) and Instagram photos are by myself or Aoife. Videos by Barry Gruff and Roger.

An absolute killer set to follow up her equally brilliant set from three years previous. A mix of songs like ‘Say Aha’, ‘L.E.S. Artistes’, Major Lazer’s ‘Hold The Line’ and new material means Santi White is top of my list to see at Berlin Music Festival this weekend.
Highlight: The backing dancers cool moves and BAMF demeanor.

The hour wait between the finish of the main stages and Austra’s set in Body and Soul was a cold boozeless one but where better to take in this Canadian band’s mystical sounding electro than late night under a tree in a natural amphitheatre. Songs from the band’s debut Feel It Break sounded perfect in the cold AM, they really are well-written tight tunes. Add Katie Stelmanis and her backing dancers Tasseomancy’s shamanistic dance moves and it’s the perfect festival closer for those who could not brave another hour for Brandt Brauer Frick at 3am.
Highlight: The dark-edged disco vibe of ‘The Beat And The Pulse’ felt through the night air.

An unexpected surprise and a perfect festival band, I had heard the ten-strong American west coast collective were a great live act and judging from their 2009 album Up From Below, I had high hopes but they easily surpassed those and went straight into the great festival set book. A raggedy celebratory, up-in arms triumph of musical positivity.
Highlight: The crowd singing back the chorus of ‘Home’ during the extended outro.

Besides some jibes about himself and Public Enemy being the only black people at the festival and the cheeky culmination of the set with The Rolling Stones’ ‘Paint It Black’, Fly Lo delivered a beat-tight set of songs taken from his own back catalogue along with samples from Radiohead’s ‘Idioteque’ , Mr. Oizo and Odd Future’s ‘Yonkers’. The set is all one big beautiful blur with lots of dancing despite the dodgy sound.
Highlight: ‘Do The Astral Plane’ and Fly Lo’s eternal smiling face.

A masterclass in getting old in hip-hop gracefully (if we ignore Flava Flav’s on-screen reality TV antics), PE are most definitely still in effect. A greatest hits set including classics like ‘ Don’t Believe The Hype’, ‘Fight The Power’, ‘Shut Em Down’ and ‘Bring The Noise’ kept the energy levels up significantly. Not even Flav’s drum solo interlude could detract from the buzz and DJ Lord’s turntablist routine of ‘Smells Like Teen Spirit’ with scratches from behind his back added to the spectacle.
Highlight: The consistent energy of a PE2011 show.

It had been a few years since Richard Fearless and co. played live as Death In Vegas so pre-show talk was all about whether they’d be able to recapture that spirit. There were no such problems. An intense and brooding set of krautrock-inspired electronica from a full band featuring some recognisable nuggets like ‘Death Threat’ and ‘Hands Around My Throat’ alongside new material left me salivating to hear forthcoming comeback album Trans-Love Energies.
Highlight: ‘Hands Around My Throat’.

Hot damn. The funkiest and most fun set at the Picnic went to an Irish band whose live renditions of their self-titled album got the Body and Soul crowd moving in the sunshine. Throw in a bit of disco, multi-part harmonies, glockenspiel and a super-tight rhythm section and Tieranniesaur are one hot rock-blocking live prospect.
Highlight: Finally seeing Annie Tierney and co. live for the first time and the fact that they were deadly.

My third time around seeing Twin Shadow live and a final confirmation that this is a band who are infinitely better live than on debut album Forget. In a live setting, the songs are more full-bodied, less-languid and hazy, more direct and danceable. Good time vibes from one of the coolest bands around.
Highlight: ’80s dance moves.

Heart-pumping electronica from the 18 year-old producer representing the Newbridge massive. From complete unknown to much-hyped Irish producer and remixer of a marquee name like Interpol (all while pumping out enough study to respectively finish his Leaving Certificate exams) in just over six months, Jack Colleran hasn’t had much time to catch up with himself but if his Body And Soul Love Letter set is anything to go by, this kid doesn’t need much time to put his own spin on heady electronic music, even if not much is happening on stage (visuals in future maybe?). He even manages to fit in an unreleased Bon Iver remix at the start of the set.
Highlight: Hard to pick but probably ‘Jimmy Francis’.

Another bloke who has come a long way. Gaz Le Rock’s army also only came into existence in the last year but the band have got it together very very quickly. From live debut to near festival headline slot in mere months, Retarded Cop are tight, the kind of tight festival rock band that blow the socks off everyone else on sheer wound up power and good-time pop punk rock music. Gaz Le Rock parades the stage like an Irish Iggy Pop with his top off, bouncing around with exuberance to the songs from the band’s debut LP. Listen to the album here.
Highlight: Watching Gaz Le Rock become a big-stage performer in front of my eyes.

Live electro is not something that Ireland has traditionally done well over the years but Le Galaxie can now justifiably claim to be Ireland’s brightest in the synth-rave stakes. From the moment the band take to the stage, it’s relentlessly pumping songs beamed from another dancefloor universe with synthesizers, guitar and thumping bass-heavy beats, all delivered by four guys who always look like they are having a better time than anyone else. Luckily for Le Galaxie, it’s contagious. A4 pages with TUNE! are ceremoniously handed out and the excitement gets too much for singer Michael Le Galaxie who climbs the sound rigging to play some cowbell. They should have played a much much later slot. [Listen to their album Laser Disc Nights 2]
Highlight: The massive TUNE! sign.

It’s been three years since I saw Lykke Li live and since then she’s taken her performance to star status. Dressed all in black, she cuts a dramatic figure and the look perfectly suits the much more melodramatic and bombastic songs from second album Wounded Rhymes. There’s a fierceness to the live show that keeps interest up as Lykke dances through dry ice and the band punish their instruments. It’s almost cathartic. There’s even a welcome diversion into The Knife’s ‘Silent Shout’.
Highlight: Second album singles ‘Get Some’ and ‘I Follow Rivers’.

You probably know the deal with Best Coast by now. Extremely likable surf-rock from the extremely likable Bethany Cosentino and band. Hence, lots of fun was had.
Highlight: Lots of talk of Snacks, Bethany’s cat which graces the album cover.

I didn’t see all of this show but what I did see was a superb three song run with one brand new song that has me convinced The Cast Of Cheers will have no problem repeating the acclaim of their debut album Chariot. The band recently moved to London and are almost finished the recording of their second album.
Highlight: Seeing one of Ireland’s best new bands get even better.

Humorous comedic (but not just comedy) songs played through an acoustic folk lense with instantly charming vocals by Dorothy Cotter. EleventyFour’s songs were a welcome and relaxed break to the madness elsewhere and her between song banter is just as good. We got songs about how “all they eat in Sicily.. is cake”, a guy called Jeff Nelson, forklifts and other off-beat observations. Cute as a button.
Highlight: Fair play to Dorothy for warding off that dancing deck of cards and the guy who interrupted her out of his bin.