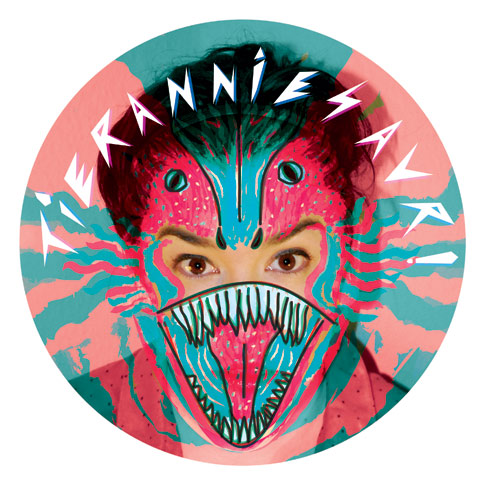 When Popical Island first appeared on the scene last year, it was Tieranniesaur’s ‘Sketch!’ that marked out the collective as something more than a fleeting visit into bright and breezy tropical pop tones. It embodied Popical Island’s ethos of fun over serious art. For fun indie-pop music can be both and Tieranniesaur’s debut proves that.

Tieranniesaur is 10 tracks of bright and breezy songs informed by all players. While Annie Tierney may be the voice of party, the five members of the band: Annie’s husband and fellow Yeh Deadlies member Padraig O’Reilly, Saileóg O’Halloran formerly of Feed The Bears, Sara Golding and Ian McFarlane and Ruan Van Vliet of Squarehead bring the atmosphere. The songs are uplifting. It was no coincidence that the band were chosen to support Tom Tom Club in Dublin last week. The two bands share the same strands of sounds, informed by funk, new-wave, disco and electro.

Tieranniesaur’s debut has rolling funk in the opener ‘Rockblocker’, tropical-pop in ‘Candy’, synth-pop in ‘I Don’t Stop’, a silly rap-verse following some sunny harmonies (“Let’s go electro like the Shangaans do”) by Bobby Aherne of No Monster Club on ‘Azure Island’, sweet melodies in ‘In The Sargasso’, the funk-stomp of ‘Here Be Monsters’, the ESG-esque ‘I Tink Ur Strange’ and the rap-jam rollcall outro of ‘Remember My Name’. The Tieranniesaur party is a LOT of fun…