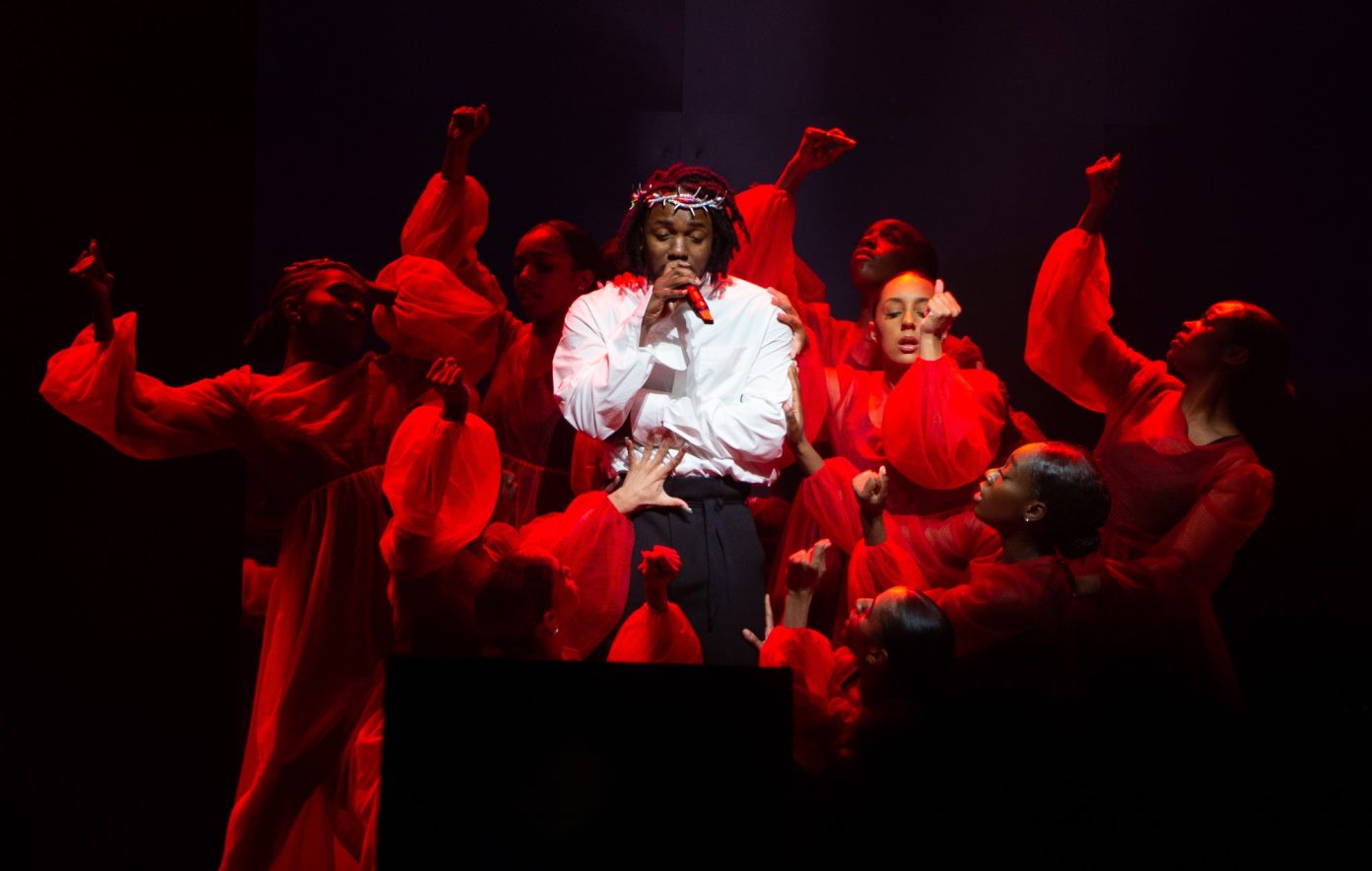 There are two Glastonburys when the festival takes place every year.

The first is based on a huge site at Worthy Farm with over 250,000 people across a bewildering number of stages, one of the largest music festivals in existence.

The second, is a TV experience. Thanks to the BBC’s coverage on their channels and the iPlayer an armchair festivalgoer could drop in on any of the festivals big five stages (Pyramid Stage, The Other Stage, West Holts, John Peel Stage and The Park Stage), and parachute themselves into the centre of all the music action.

After two years fallow, there was a renewed sense of appreciation for the BBC Glasto coverage of their 50th year, for those of us who couldn’t attend this year. The highlights appeared often and were many, culminating in Kendrick Lamar’s visionary headline performance last night – a choreographed artistic statement that dug deeper than anything you’ve seen from a headliner in a few years. After seeing that stunning piece of live art which straddled the line between theatre, dance, play and music performance while playing the hits, it feels decades since Jay Z came out and played Wonderwall on the Pyramid stage (that was 14 years ago).

Watching the festival coverage across the weekend, I couldn’t help but notice the tears shed by many of the performers, Sam Fender, Joy Crookes, Self Esteem – to name three, who finally, after two stalled years of festival seasons due to COVID, had ticked Glasto off their bucketlist.

The other thread that loomed large was the reaction to the overturning of the right to abortion by the Supreme Court in the US, effectively banning abortion in 20 US states. The regressive move was referred to by most artists across the weekend, whether it was Olivia Rodrigo bringing out Lily Allen to sing ‘Fuck You’ after listing out the Supreme Court judge nominees by name, Jarvis Cocker dedicated ‘C*nts are Still Running The World’ to the judges (changed to pricks for televised performance), Australian punks Amyl And The Sniffers rallying for body autonomy, or Kendrick Lamar’s emotional closing mantra of “they judge you, they judge Christ / Godspeed for women’s rights”. The backwards decision was seemingly on every performer’s mind.

Thanks to the wonders of BBC’s coverage and their Youtube presence, we don’t have to pack up our tents and get stuck in traffic. Here are some personal highlights of many from a welcome return to Worthy Farm this year.

Special shout to Khruangbin’s set which isn’t available on Youtube but on the iPlayer only. They brought out Leon Bridges and covered ‘Rhythm Is A Dancer’ too.

I stopped at 15 but there are whole sets on the iPlayer for the next 30 days so dive in – non-UK viewers will need a reliable VPN. Any UK viewers will have to turn on a non-UK VPN to get to watch these Youtube performances too.

Everything about Kendrick’s Glasto headliner last night had an epic and considered scale that few could match. The pageantry, the artistry, the theatricality, the stark stage with a mirrorred reflection, the troupes of male and female dancers moving in tandem with stomping emotive grace.

It was the first time since Mr Morale and The Big Steppers that Kendrick had performed live, and he focused on a greatest hits set done in chapters, starting with good kid m.A.A.D city into To Pimp A Butterfly into DAMN and only five songs from the new album, including the closer ‘Saviour’ where blood fell from Lamar’s crowned dome and he looked spent and upset as he addressed the Supreme Court’s decision to overturn abortion rights for women in the States.

“They judge you, they judge Christ / Godspeed for women’s rights”, he rapped on repeat before a mic drop left his troupe of dancers and performers to hold the spotlight in a beautiful tableau.

19-year-old Olivia Rodrigo showed more steel than many artists double her age by bringing on Lily Allen to sing ‘F*** You’ after naming every Supreme Court judge who helped overturn Roe v Wade.

“I’m terrified that so many women, and so many girls are going to die because of this,” Rodrigo says intro’ing the song. “I wanted to dedicate this song to the five members of the Supreme Court who have shown us, at the end of the day they truly don’t give a shit about freedom.”

“This songs goes out to the Justices – Samuel Alito, Clarence Thomas, Neil Gorsuch, Amy Coney Barrett and Brett Kavanaugh – we hate you.”

After seeing this set at both Forbidden Fruit and Primavera Sound in recent weeks, Bicep’s big A/V show seems tailor made and even more impressive on a TV audience, and the pumped-up arrangement of ‘Apricots’ is an experience I want to relive again and again.

I Do This All The Time / You Forever

Wearing a large plastic nipple-heavy bra (which both references Madonna and a domed Sheffield Meadowhall shopping centre), Rebecca Lucy Taylor’s Glasto set felt like a confirmation of the last year of Self Esteem’s career, encapsulating all the empowerment and raw emotion of the songs on Prioritise Pleasure.

“I feel like Robbie Williams!,” she exclaimed at one point.

There’s not many bands who perform with as much sass and vim as Australian four-piece Confidence Man. A perfect Friday afternoon setup for a festival. Silly, ear-grinning fun.

Then there are few bands who have a telepathic musical connection like Big Thief. Alchemy seems to happen every time they perform together. I’d recommend watching the full set on iPlayer. ‘Not’ was particularly moving.

Spice Up Your Life with Mel C

What’s a big festival headline set without a special guest that no-one would expect and a surprising cover? Blossoms understood the brief and brought Mel C on-stage for a rendition of Spice Girls’ ‘Spice Up Your Life’ because why not? The last two years have been long for us all.

Looking At Your Pager

If you have a spare hour and a bit, go watch Four Tet’s stunning Glasto set from Saturday night. Featuring song of the summer ‘Looking At Your Pager’.

Love And Hate In A Different Time

Gabriels are supporting Michael Kiwanuka in Dublin tonight, you might want to go after seeing this. Jacob Lusk’s voice is heavenly.

The song is from the album Diablo out on Phantasy on September 9th.

It’s been heartening to see Jessie Ware step into the disco ball spotlight for recent festival performances drawing on 2020’s What’s Your Pleasure resplendent with backing dancers and glittering costume.

‘Save A Kiss’ was a highlight of her set at Primavera Sound in Barcelona, and again, here at Glasto, confetti and all.

Paul McCartney’s Saturday headliner set to mark his 80th birthday suffered from Macca’s voice not at full-strength and a meandering 37-song setlist that took in Wings, his solo stuff, The Beatles and yet, held off on most of the hits til the final stretch, when Bruce Springsteen and Dave Grohl joined him.

For the first song of the encore, Macca duetted with the isolated vocal of John Lennon from the Get Back documentary courtesy of Peter Jackson, adding a rousing nod to the recent success of the films.

Man, I really regret missing Little Simz in Dublin a day or so after Other Voices in Dingle last December. She’s just getting better and better.

If you didn’t fancy Paul McCarney’s nostalgia set at the Pyramid stage, there was always Megan Thee Stallion’s hard-rap booty-shaking set over at the Other Stage for a bit on contrast.

The Pet Shop Boys have long brought big productions to festivals, and in 2022, their camp 80s’ Italo-indebted electro-pop was given a relevance boost with last year’s feature of ‘It’s A Sin’ on the Channel 4 show of the same name, as covered by Years & Years.

Years & Years’ Olly Alexander came out to perform with the Pet Shop Boys for ‘Dreamland’ during the set, having performed his version during a great main stage pop set prior, but the Pet Shop Boys’ version is the definitive take, delivered during a set filled with greatest hits.

Welsh artist Cate Le Bon deserves an award for her medieval chain head-dress and her woozy music too. A great set at the Park stage on Sunday evening.